If it's Wednesday it must be Morford on yoga and some facts and bullshit going on about it. You should read this. 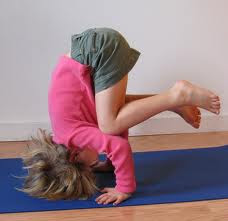 It would appear the NCLP is suing, on behalf of some very uptight SoCal parents, the Encinitas Union School District over a pilot program that teaches some playful yoga basics – stretching, breathing, a little calming meditation – to children a couple times a week. The horror.

Their claim? Yoga is rooted in the Hindu “religion,” and therefore serves as an indoctrination into that belief, much in the same way techno music and giant mimosas “indoctrinate” kids into homosexuality. The NCLP claims that rules separating church and state demand these children stop that happy, self-empowerment bull-crap right this minute, and get back to fearing an angry, all-American God, or no one gets dessert.
...

To religious fundamentalists, this is yoga’s most dangerous, un-Christian, sacrilegious teaching of all: That you are not innately broken, or flawed, or sinful. That there really is no god to worship but the one already present in you, waiting to be expanded. That you are already the divine light you seek. Therefore, you need not attend any church, send cash to any gloomy priest, beat yourself into bloody redemption, or believe what your parents or politicians tell you about heaven or hell, sin or fear, guilt or shame or gay people or women or nature or time or foreigners or politics or sex. You need only wake up to your own innate divinity, every moment, every breath, every touch and taste and step, before it’s too late. See? No wonder they’re terrified
...

So yoga is a religion, but it is no religion at all. Yoga is a divine reconnection and means to expand the soul via all sorts of powerful tools, techniques, icons, sutras, tantras, musings, offerings, chantings, stretchings, sweatings, classic moral precepts and healthy lifestyle adjustments, but without organized religion’s nasty knife drawer of shame and guilt, sin and fear, numbed-out heaven and childish threats of eternal, all-consuming hell.

Can you imagine teaching such a thing to children? “Indoctrinating” them into such a belief? Can you imagine how happy and balanced, powerful and calm, strong and spiritually self-defined they might become? What a terrible world that would be.

Don't get your knickers in a twist, young Mark. It's simply a fearful form of made-up mumbo-jumbo going after a not-fearful one that may actually be spiritual. Religionists don't understand spirituality and it scares the shit out of 'em to think kids might actually learn another point of view. That's not what school is for. Is it?
Posted by Gordon at 12:09
Email ThisBlogThis!Share to TwitterShare to FacebookShare to Pinterest