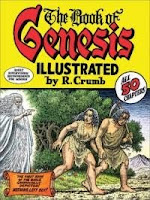 I was reading the review and ad for R. Crumb's latest work of graphic fiction and thought the last paragraph might be apropos in light of Fixer's post:

But, as every student of the Bible knows, there’s no such thing as a reading without interpretation. A big challenge from the start: how should God be depicted? In an interview with Time, Crumb explains that he considered rendering God as a light emerging from a cloud, or coyly recontextualizing him as a black woman, but in the end settled on a more pedestrian bearded and robed figure that he says resembles his father: “if you actually read the Old Testament,” he told Time, “he’s just an old, cranky Jewish patriarch.”

The oldtimers who invented the God we're kinda stuck with had to go with what they know which wasn't much.

From Crumb's wiki on his new book:

It contains all 50 chapters of Genesis and comes with a warning on its cover: "Adult Supervision Recommended for Minors."

When it comes to creation legends, I would recommend adult supervision for adults as well lest they take that shit literally and think it's really so.

As creation stories go, I'm kinda partial to the Navajo one. Very colorful and doesn't try to make you feel guilty for things that never happened.

Hmmmm. Musta been a cranky old Jewish mother influence on Genesis too...
Posted by Gordon at 13:30
Email ThisBlogThis!Share to TwitterShare to FacebookShare to Pinterest