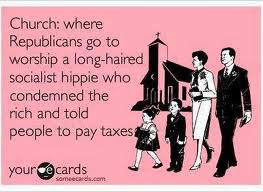 Posted by Gordon at 14:04
Email ThisBlogThis!Share to TwitterShare to FacebookShare to Pinterest

My "christian' cousin was telling me how much she hates liberals. I had to laugh and tell her that Jesus was a liberal. She hasn't spoken to me since.