Ready to Serve: Buckles (right), now 107, in a photo taken when he enlisted in the Army in 1917. At left, French troops stand guard along trenches in World War I.

Of the 2 million American soldiers sent to the trenches during World War I, only Frank Woodruff Buckles is still alive. The retired Army corporal, who turned 107 this month, is all that prevents the first world war from slipping into the secondhand past. [...]

In America, the first world war remains a largely forgotten conflict. It has no national monument on the Washington Mall, no blockbuster film, no iconic image equivalent to soldiers' raising the flag on Iwo Jima. [...]

Actually, it does, but, boy, do you have to know where to look! 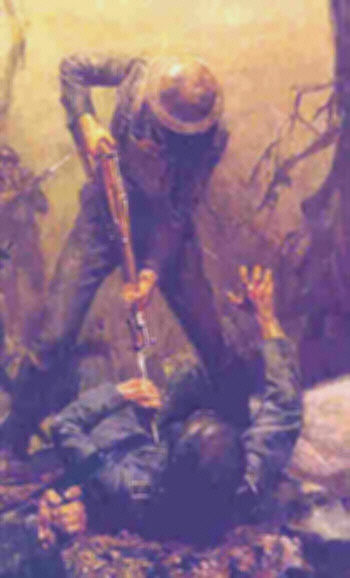 Rebooting the memory of WWI matters for reasons other than nostalgia. Historians see the conflict as the original canvas on which many aspects of today's Iraq War were drawn. "Most of the problems we're grappling with in the Middle East are legacies of the great military binge of 1914–1918," says Niall Ferguson, a revisionist British historian and author of several studies of war. He adds that the British also faced an insurgency when they invaded Baghdad and declared themselves liberators in 1917. "The American case in Iraq is one of historical ignorance," he says. In recent years, Buckles has also become a reluctant spokesperson for his generation—its impact and its memory. "Might as well be me," he told NEWSWEEK, adding that an official service honoring all U.S. veterans when he dies would be the "right thing to do."

I have a personal connection to 'The War To End All Wars'. How's that workin' out, by the way? Anyway, my Dad, who passed in 1965, was a WWI U.S. Army aviator. If I can find the picture of him standing next to his Jenny, which was nose-down in a cornfield at the time, I'll put it up.

I've studied WWII, the Korean War, and the Vietnam War over the years because of their impact on modern times, and they're kinda fascinating. I only recently got interested in the First World War when I realized that it was the biggest war ever fought over the least of reasons. It was the overdue end of at least three empires, and an absolutely straight line can be drawn from the pistol shot in Sarajevo that started it to the Middle East today.

If only those in power had a sense of history. Maybe we could have avoided an awful lot of misery for an awful lot of people. Our so-called leaders don't give a tinker's dam for history or for people, damn them. 'Twas ever thus. Sigh.