Another Empire To The Graveyard 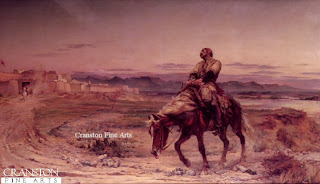 Remnants of an Army by Lady Elizabeth Butler.
Depicts Dr. William Brydon, an assistant surgeon in the Bengal Army arriving at the gates of Jellabad on his exhausted and dying horse. He was thought to be the sole survivor of some 16,000 strong army and followers from Kabul, which was forced to retreat the 90 miles over snow covered passes to Jellabad during the first Aghan war. A few others eventually struggled through to the fort.

Michael Korda on our ill-fated Clusterfuckistan adventure and defeat.

Nations, like people, seldom learn from their own experience, still less from the experience of others. It is a huge tribute to the tact of the distinguished British historian William Dalrymple that it is not until page 435 of his dramatic, richly peopled, and spell-binding history of Shah Shuja and the first British battle for Afghanistan, when he at last draws the inevitable parallel between the British attempt to subdue and control Afghanistan in the mid-19th-century and America’s own disastrous war there over the past decade. [...]
...

Perhaps the most famous military painting in the history of British art is Lady Elizabeth Butler’s The Last Remnant (Wrong title - G), an immense Victorian tear-jerker of a picture that depicts the approach of the alleged last survivor of the British army sent to Kabul, Dr. Brydon, to the gates of Jalalabad, slumped on an exhausted pony and bearing the news of the British Army’s total destruction (nearly 20,000 killed). In a nation that has often sought pride as much in heroic defeats as in victories, the haunting scene of the Last Stand of the 44th Foot at Gandamak—the soldiers forming a square and defending themselves with their bayonets until every one of them was slaughtered by howling, ferocious Afghans—remains as well remembered in Britain as Custer’s Last Stand is in the United States.

One might have hoped that the virtual annihilation of a whole British army in 1842, as Britain’s imperial power waxed, would have discouraged the United States from trying to impose its will on Afghanistan, or at least persuaded the United States government and military establishment to study the past before committing us to the longest military adventure in American history, but no such luck.

The Queen(s) in this case being Cheney and Bush, neither one of whom has any idea what it's like to be a soldier. Damn their eyes.
Posted by Gordon at 13:43
Email ThisBlogThis!Share to TwitterShare to FacebookShare to Pinterest

You would think that we would have studied the Soviets in Afghanistan. If a country that planted explosive toys couldn't defeat Afghanistan why did we think that we could?
It would probably have been a good idea to study the French disaster in Vietnam before committing troops there, too.

Recent history indicates that the only disaster planning our leadership can do is planning the biggest disaster they can get us into. Exit strategies are for pussies.

merlallen - Think?! That would be refreshing! Don't hold your breath.