John Nichols, dated yesterday no doubt prior to the 'document dump veep pick'. 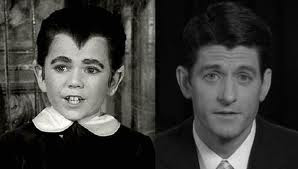 The hyper-ambitious political careerist -- who has spent his entire adult life as a Congressional aide, think-tank hanger-on and House member -- is looking for a road up. And he is sly enough to recognize that, like Dick Cheney with George Bush, he could be more than just a vice president in the administration of so bumbling a character as Romney.

Ryan figured Romney out months ago.
...

Like Romney, Ryan is a son of privilege who has little real-world experience or understanding. He presents well on Sunday morning talk shows and in the rarified confines of Washington think tanks and dinners with his constituents -- the Masters of the Universe on Wall Street -- but his record in Congress and the policies he now promotes are political albatrosses.

Some Republicans, perhaps even Romney, do not get this.

But the Obama campaign recognized, correctly, that Ryan's positioning of himself as the point man on behalf of an austerity that would remake America as a dramatically weaker and more dysfunctional country makes him the most vulnerable of prominent Republicans.
...

But under the serious scrutiny to which he would finally be subjected, Ryan would be revealed as something worse than a fiscal fabulist.

He would be revealed as a hypocrite of the highest order. Americans can handle hard truths and bold ideas. But they're not so good with hypocrisy.

And they wouldn't be so good with Paul Ryan.

Obama and Biden will shred these clowns like taco cheese.
Posted by Gordon at 13:01
Email ThisBlogThis!Share to TwitterShare to FacebookShare to Pinterest

As someone else pointed out, Mitt the Twit and ZEGS, the Vulture/Voucher ticket.

I disagree. I think that the Rethug program of LCS* will win the day The voting machines and the results (including the exit polls, if, when and where they are taken are fixed, the voters are suppressed, polling places are changed with the corresponding number of voting machines reduced. The ones that are placed there have a greater chance of breaking down with the repair people not notified in a timely manner nor dispatched asap so the machines are not in service a larger part of the day. Money plays a large part in the candidates we don't get to choose. We now get the "best"** candidates that money has bought. Our voting system I would rate as lower than "whale shit" at the Challenger Deep part of the Marianas Trench. Given my choice for the honesty of our current voting system or playing 3 card Monte. I say play 3 card Monte as it is much more honest.

LCS is a huge part of their M.O. Without it they'd have no chance and they know it.