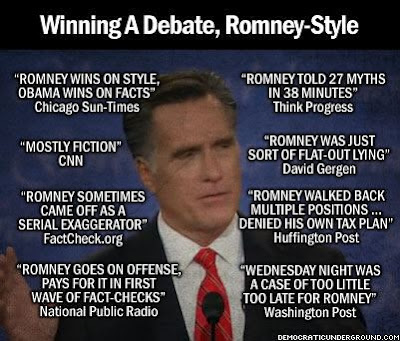 Via Seniors for a Democratic Society.

1. If Republican Mitt Romney had an actual plan that he could describe without lying about it, last night would have been a game-changer. Since he doesn't, well, he put on a good show.

Shorter: Willard "won" the night by delivering his Repug talking points, lies, and flip-flops beautifully. Obama was a lump. He was good on facts but short on killer instinct. I wonder what his Stealth Ninja Jedi strategy really was. Probly to let Willard roll and see how much of his bullshit comes back and bites him on the ass. Maybe it'll work longer term, but in the frenetic 24-hour news cycle centered on last night he clearly lost by not being exciting enough, purely on optics.

So say the gasbags and pundits who opine on that shit. I thought he did fine, but then I go for substance over style. That's not the TV way. If it was, Kim Kardashian wouldn't be a celebrity. I guess if you're a big enough ass, you win.

Romney Goes On Offense, Pays For It In First Wave Of Fact Checks

That would be good news if facts mattered over perception. 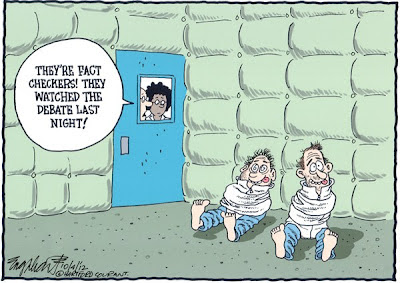 Heh...
Posted by Gordon at 12:52
Email ThisBlogThis!Share to TwitterShare to FacebookShare to Pinterest