Hard to imagine, but the wingnuts constantly come up with new nadirs in all areas.

The Political Carnival, links at site. 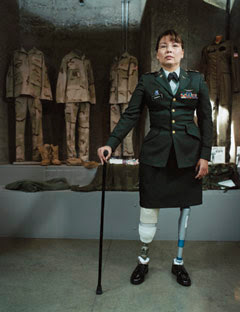 You know how there are people you love to hate? Well, here’s a grease spot of a guy that you simply loathe, no fun, “love,” or snark involved whatsoever. You all remember Deadbeat Dad Joe Walsh, the disturbingly crass GOP/tea bagger Congressman from Illinois, right? Yes, that Joe Walsh.

Per VoteVets.org, he’s sunk to a new despicable low. Here’s the press release:

Chicago, IL - In an appalling new low, Congressman Joe Walsh today slammed his opponent Tammy Duckworth’s military service. Walsh told Politico, “What else has she done? Female, wounded veteran … ehhh.” Duckworth served as a Black Hawk helicopter pilot in Iraq in 2004, and lost her legs and part of the use of her right arm. She was awarded the Purple Heart for her combat injuries and is still active as a Lieutenant Colonel in the Illinois National Guard.
...

“Just when you think Congressman Joe Walsh couldn’t sink any lower, he insults the service and sacrifice of our Veterans, particularly one like Tammy who lost her limbs in the line of duty. Congressman Walsh owes Tammy Duckworth and all Veterans an apology for his outrageous disrespect for their service,” said Jon Soltz, Iraq War Veteran and Chairman of VoteVets.org PAC. “But it’s not just that. If you think working for America’s veterans at the VA both in Washington and Illinois is nothing, if you think working to improve the economic lives of veterans is nothing, then Joe Walsh’s record is below nothing. He represents the do-nothing, obstructionist, extreme Tea Party wing of the GOP, not the values that Tammy stood up for.”

Somebody needs to knock the dog shit outta that worse-than-worthless motherfucker Walsh. He Never served a day in his life, besides stiffing his kids outta their child support.

Note to Walsh: Shut yer fuckin' pie hole, asshole, and I'd love to do it for you. Colonel Duckworth is every inch a woman and United States soldier and more of a man than you'll ever be.
Posted by Gordon at 13:28
Email ThisBlogThis!Share to TwitterShare to FacebookShare to Pinterest

He Never served a day in his life, besides stiffing his kids outta their child support.

It appalls me to think that this shit stain of a human being is breathing my oxygen. Remember 'Whack a Wreck' fund raisers back in the day? I suggest a 'Whack a Rat' fund raiser. $10 a turn. The funds raised would make the lottery look like a bake sale.

I'm being facetious, I guess.

Facetious is good when you're talking about assholes like that.

The competition for "Number One Asshole" continues to amaze me.