Murder made legal will not stand 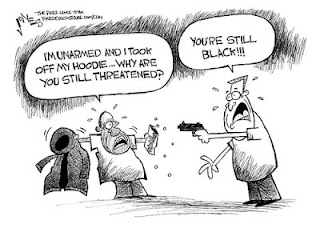 The Rude Pundit on "The Niggering of Trayvon Martin":

We see this again and again. A black male who captures the imagination of the nation must be degraded by the right. He must be turned into something else, some Other. President Obama can't simply be an educated black man from a lower middle-class background with whom they disagree ideologically. No, he's got to be an enemy, a foreigner, a nigger. It's hard to denigrate someone who might be like you, conservatives. But it's easy to attack a nigger because he's just a nigger. Or a coon.

You're allowed to defend yourself against a REAL threat everywhere, "duty to retreat" laws notwithstanding, but apparently, the "stand your ground" laws in 24 states allow you to START a confrontation and then get scared halfway through the proceedings when it's apparent you're going to lose and shoot the guy you started the confrontation with. If he's black.

Zimmerman knows by now that he fucked up BAD. That's why he's hiding under a rock somewhere and not becoming a big celebrity like Kim Kardashian's ass by bragging on FOXNoise about how he saved the Republic by blowing a kid armed with pogey bait to kingdom come. I've got news for him that he already knows: he's going to go to prison. As he should.

The Sanford cops fucked this deal up enough, probably knowing full well what they were doing, that the racist cretin punk Zimmerman will never be charged with 1st degree murder, but I hope the punk gets 20 to life for 2nd degree murder. We'll see how well he "stands his ground" in a Florida prison full of black men when the NRA and racist cops and pols and gasbags drop that wannabe real man like a hot rock and aren't there to back him up. Street justice - the same "justice" given young Mr. Martin under that stupid right-wing law - is liable to get him first. Fine with me.

Can We Trust the Cops’ New Account of Trayvon Martin’s Killing?

No. I've read the police reports on my own arrests enough times to know that cops are skilled liars with a criminal justice system that's on their side.

The Sanford cops handled this about like innumerable "white man kills black man" cases in the South and elsewhere, figuring no one would ever notice. Once the rocks were turned over and the sunlight shone on this incident and the story made the big time, they realized how badly they had screwed up and are trying, in vain it will turn out, to save their own asses. Even as professional liars, they're not that skilled. They had best STFU and leave the subsequent skilled professional lying on their behalf to their lawyers, who will get paid even if the Sanford PD is no more after this.
Posted by Gordon at 13:12
Email ThisBlogThis!Share to TwitterShare to FacebookShare to Pinterest

I haven't heard the term pogey bait in almost 30 years!! Thanks for that. That's real proof that you're a jarhead.

Police reports, heh. Yeah, I have the police report from when the dimwit ran the red light and I t-boned his ass. Police report makes me look like I was doing heroic shit to avoid creaming the dude. Reality was that I was standin' on the brakes hopin' the dude got the shit outta my way, 'cause in a tall-ass Jeep I sure the hell wasn't gonna be zig-zagging around his cheap-ass Shittylay, that's how ya flip a Jeep, especially a lifted one. But the cop liked me, and he didn't like the assholes in the car responsible for runnin' the light and ruining his donut break, so (shrug). Ya know how it goes.

Yeah, I was kinda barfin' at the Sanford cops goin' back and re-writin' their report to make this honkey bastard look like a hero, too. Fuck them and the cross they burned last weekend, good and hard. Well, not me, personally, 'cause I'd be worried about my dingus catchin' somethin' from their racist asses, but you get the point.

Well, the other thing is, why we should be take anything Zimmerman says as gospel? OF COURSE, he's going to try to make the facts look like it was "self-defense"--it's either that or his ass is going to jail.

This is really a "credibility contest"--one witness' word against another. That's why we have trials--so that a jury can determine who's telling the truth. But unfortunately one side of this story can't be heard--because the would-be teller is dead. Pretty convenient for Georgie Z.

The cops should have arrested him, rather than simply taking his word it was "self-defense". If he could then prove it was self defense in court then, yeah, under Fla. law he should be allowed to go free.

Of course, the Fla. law is completely insane. It practically ENCOURAGES people to shoot first and then claim "self-defense" (guess it's the wet dream of certain of the "gun nut" crowd.)

Yep, the "law and order" folks have given us a law that actually PROMOTES crime. As if I needed any further reason to believe that these folks shouldn't allowed to manage anything more complicated that a Porta-Potty franchise....