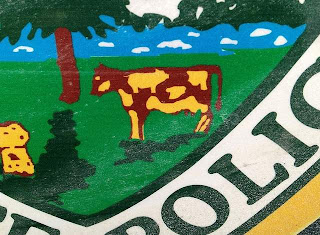 State officials Thursday pointed to the failure of the quality assurance office within the Vermont Correctional Industries Print Shop in St. Albans to detect a prisoner-artist’s addition made four years ago to the traditional state police logo. A spot on the shoulder of the cow in the state emblem was modified into a pig…

Heh. Reminds me of the time there were several CHP officers eating dinner in a local restaurant that was having a big Jägermeister promo going on in the bar at the same time. All three Chippie cruisers left with a brand new Jägermeister bumpersticker.

Putting a pig inside the official door graphic is subtle fuckin' GENIUS! Took 'em four years to catch on. Kudos to that gent and I hope to God he'd done his time and got out before this got discovered.
Posted by Gordon at 14:54
Email ThisBlogThis!Share to TwitterShare to FacebookShare to Pinterest

If the con who did that is still in, he should be given a pardon.