From the LATimes with accompanying article. 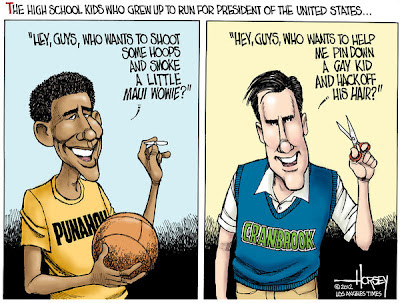 As with many things about Mitt Romney, it's hardly a surprise to learn that he was one of those pampered nancy boys who, because he wouldn't drink or ball like crazy because he'd get raped by the ghost of Brigham Young or however the fuck they threaten Mormon kids, took out his young adult hormonal rage on others around him through "pranks." So he treated a nearly blind teacher like the man was Mr. Magoo, tricking him into walking into a door for the giggling approval of the other prep school bitch boys. Romney was a joker, don't you know?

Sure, sure, there's shit that Romney did that can be chalked up to stupid teenager behavior. But at least two of the acts detailed by the Post would be considered felonies. There's the hair-cutting incident, where scared, closeted, hippie-haired John Lauber, "his eyes filling with tears, screamed for help" as he was tackled and held down by a group of classmates, while "Romney repeatedly clipped his hair with a pair of scissors." Romney can't even claim he was drunk or on drugs. He just did it.

Then follows a newspaper photo of Willard The Rat from back in the day with a verrry ironic and cautionary caption and this observation:

Yes, that is exactly what it looks like. And that's the look a bell tower sniper gives just before opening fire on the school below. Let's not allow America to be that school.

We're trying desperately to get over the last sociopathic entitled prick we had for Preznit. He goddam near wrecked the joint. Willard would finish the job.

No choice. None at all.
Posted by Gordon at 13:05
Email ThisBlogThis!Share to TwitterShare to FacebookShare to Pinterest


For those with access to the federal courts data base (PACER), select Arizona and search on Huminski for collateral very relevant matters.