Hear Ye, Future Deep Throats: This Is How to Leak to the Press

Shorter: Same way you sell dope. Heh.
Posted by Gordon at 13:18
4 comments
Email ThisBlogThis!Share to TwitterShare to FacebookShare to Pinterest

Posted by Gordon at 00:01
0 comments
Email ThisBlogThis!Share to TwitterShare to FacebookShare to Pinterest

Paul Krugman on states opting out of Medicaid expansion.

House Republicans have voted 37 times to repeal ObamaRomneyCare — the Affordable Care Act, which creates a national health insurance system similar to the one Massachusetts has had since 2006. Nonetheless, almost all of the act will go fully into effect at the beginning of next year.

There is, however, one form of obstruction still available to the G.O.P. Last year’s Supreme Court decision upholding the law’s constitutionality also gave states the right to opt out of one piece of the plan, a federally financed expansion of Medicaid. Sure enough, a number of Republican-dominated states seem set to reject Medicaid expansion, at least at first.

And why would they do this? They won’t save money. On the contrary, they will hurt their own budgets and damage their own economies. Nor will Medicaid rejectionism serve any clear political purpose. As I’ll explain later, it will probably hurt Republicans for years to come.

Gee, he says that almost like it's a bad thing!

No, the only way to understand the refusal to expand Medicaid is as an act of sheer spite. And the cost of that spite won’t just come in the form of lost dollars; it will also come in the form of gratuitous hardship for some of our most vulnerable citizens.
...

Just think about this for a minute. It’s one thing when politicians refuse to spend money helping the poor and vulnerable; that’s just business as usual. But here we have a case in which politicians are, in effect, spending large sums, in the form of rejected aid, not to help the poor but to hurt them.

And as I said, it doesn’t even make sense as cynical politics. If Obamacare works (which it will), millions of middle-income voters — the kind of people who might support either party in future elections — will see major benefits, even in rejectionist states. So rejectionism won’t discredit health reform. What it might do, however, is drive home to lower-income voters — many of them nonwhite — just how little the G.O.P. cares about their well-being, and reinforce the already strong Democratic advantage among Latinos, in particular.

Rationally, in other words, Republicans should accept defeat on health care, at least for now, and move on. Instead, however, their spitefulness appears to override all other considerations. And millions of Americans will pay the price.

What goes around comes around. I hope it bites the Repugs on the ass.
Posted by Gordon at 12:41
0 comments
Email ThisBlogThis!Share to TwitterShare to FacebookShare to Pinterest

By Ernie Pyle, one of the great war correspondents. He did not survive WWII.
The following courtesy of the National WWII Museum in New Orleans.

Submerged tanks and overturned boats and burned trucks and shell-shattered jeeps and sad little personal belongings were strewn all over these bitter sands. That plus the bodies of soldiers lying in rows covered with blankets, the toes of their shoes sticking up in a line as though on drill. And other bodies, uncollected, still sprawling grotesquely in the sand or half hidden by the high grass beyond the beach.

In the preceding column we told about the D-day wreckage among our machines of war that were expended in taking one of the Normandy beaches.

But there is another and more human litter. It extends in a thin little line, just like a high-water mark, for miles along the beach. This is the strewn personal gear, gear that will never be needed again, of those who fought and died to give us our entrance into Europe.

Here in a jumbled row for mile on mile are soldiers’ packs. Here are socks and shoe polish, sewing kits, diaries, Bibles and hand grenades. Here are the latest letters from home, with the address on each one neatly razored out – one of the security precautions enforced before the boys embarked.

Here are toothbrushes and razors, and snapshots of families back home staring up at you from the sand. Here are pocketbooks, metal mirrors, extra trousers, and bloody, abandoned shoes. Here are broken-handled shovels, and portable radios smashed almost beyond recognition, and mine detectors twisted and ruined.

Here are torn pistol belts and canvas water buckets, first-aid kits and jumbled heaps of lifebelts. I picked up a pocket Bible with a soldier’s name in it, and put it in my jacket. I carried it half a mile or so and then put it back down on the beach. I don’t know why I picked it up, or why I put it back down.

Even necessary wars suck. WWII may have been the last of those.
Posted by Gordon at 14:26
3 comments
Email ThisBlogThis!Share to TwitterShare to FacebookShare to Pinterest

This whackjob idea is nothing new, believe it or not. I actually googled it. The usual suspects.

I'm safe. Never touch the stuff. Curdled milk products scare me. I am a little worried since Mrs. G uses it and feeds it to the dogs. Might hafta get some protective juju...
Posted by Gordon at 13:54
0 comments
Email ThisBlogThis!Share to TwitterShare to FacebookShare to Pinterest 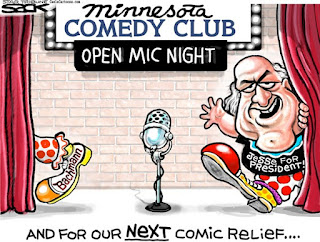 Posted by Gordon at 12:34
1 comments
Email ThisBlogThis!Share to TwitterShare to FacebookShare to Pinterest

Goblinbooks is closing in on Rude Pundit territory! Ya might wanta ice down the ol' unit before reading!

My fellow Americans: I wanted to be honest about why I'm not running for reelection. The truth is I'm tired. Tired of all of it. When I started this job I thought I'd found the purest form of kink possible, something that would never ever get boring. But it's time to admit it: It just doesn't ring Michele's joy-buzzer the way it used to....

[...] I toyed with different kinds of risk-aware stuff: a lot of humiliation and fear play. Then I did some suffocation, some punishment shaving, a little fire cupping... and a few kidnapping scenarios that got deep into some dark territory. But nothing, absolutely nothing, got my rocks off like being a socially conservative Republican. I thought the thrill would last forever. I really did.

Do you know what it's like to pass a law that straps a chastity belt around millions of people you don't even know? Or to start talking smack about how some random Muslim person might be part of a terrorist fifth column - and there's no way to prove he or she isn't of course, so they just have to live in a nightmare of paranoia you created? I choked out a whole roomful of sorority girls once and locked them in a storage unit. But what I did in Congress over these past few years was a thousand times more intense. I think rightwing politicians are exploring the last really shocking and unpredictable kind of dominance work in the whole world. Telling someone their entire life is going to be destroyed because I have these weird religious beliefs... that is one sick, hot ball of deviance right there. Putting a district court judge in pony-leather doesn't even come close.
...

And whoever moves into my old office: You might want to bleach it down. Thoroughly. Every surface. Stuff happened there.

Bleach! On the rocks...
Posted by Gordon at 13:40
2 comments
Email ThisBlogThis!Share to TwitterShare to FacebookShare to Pinterest

The GOP Knows That it is Broken

Last November, after the elections, the House Republicans chose their committee chairmen for the 113th Congress. All nineteen of them were white men. This followed stunning events in the last Congress, like holding a hearing on the availability of contraceptives without inviting any female witnesses. As far as I know, there are no professed Muslims, Buddhists, Hindus, agnostics, or atheists in the Republican House caucus, and Eric Cantor is the only Jew. There are no openly gay House Republicans. There is a stunning lack of diversity in background and belief systems, and the leadership is almost entirely male. Despite this, the House Republicans have broken out in factions. One reason that they have voted to repeal ObamaCare 37 times is that it helps keeps these factions from getting out of control. Whenever the natives get restless, Eric Cantor has another repeal vote to get everyone back on the same page for five minutes. These votes are the equivalent of a zookeeper's tranquilizer gun.

The House keeps somewhat busy voting for things that will never in a million Sundays become law. Cantor has been moving bills that are intended to "frame" the party as policy-minded and family-friendly, but it's nothing but a charade meant to feed some lower reptilian part of the electorate's brain. You're reading this; you must be a political junkie. Do you know what is in any of Cantor's bills?

What the GOP is doing makes no sense. They behave as if they can get 100% of what their most radical and deluded members want even though they only technically control one half of Congress and there is a relatively popular and freshly-reelected Democrat in the White House. It doesn't matter how many times the Speaker points those facts out, he has no ability to get those facts to sink in. They act like President Obama is more intransigent than President Clinton, but the Gingrich-led Congress actively worked to find areas where they could work with Clinton. When Boehner tried to do that, he almost lost his speakership. And Gingrich had a lot more leverage because Bob Dole and Trent Lott were in control of the Senate.

I believe the root problem here is that Republicans told lies for so long that they finally produced a generation of officeholders who actually confuse lies with the truth. They got high on their own supply. No wonder Bob Dole thinks they need to go to a collective rehab.

Like anything else that's broken, fix it or junk it. I think the Repugs are too far gone to fix, and since they don't have any usable parts, it's landfill time. Or as we say in the motorcycle biz, best to lift up the gas cap and slip a new motorcycle under it.
Posted by Gordon at 13:25
0 comments
Email ThisBlogThis!Share to TwitterShare to FacebookShare to Pinterest

Heh. Climate change has gone from being a hoax to just another evidence-free accusation.

Supreme Court Could Throw Out Voting Rights Act
If Justice Thomas is allowed to vote.

New Company Plans Starbucks-Style Pot Stores
Complete with places for stoners to sit all day and stare at their smartphones.

Mississippi Man Sues Lawn Mower Maker After Being Attacked by Yellow Jackets, Then Run Over by His Lawn Mower
Says he'll also sue the next sonofabitch who thinks it's the least bit funny.

My sides, they hurt...
Posted by Gordon at 12:23
0 comments
Email ThisBlogThis!Share to TwitterShare to FacebookShare to Pinterest

WTF?! Headline of the Day

"Do not ask me to enter the mind of the totalitarians running this government of the city," Rabinowitz said when asked what she thought was the motivation behind the program.