Published on Sep 3, 2013
Emmylou Harris and the Hot Band perform a live version of the Gram Parsons/Tom O'Brown song "Return Of The Grievous Angel" from a show in 1984.

Quote & 'Toon of the Day

From Tea party Sen. Ted Cruz is eager to force a government shutdown

Sanity, however, is seen as weakness by the Republican militants.

The GOP in a nutshell. 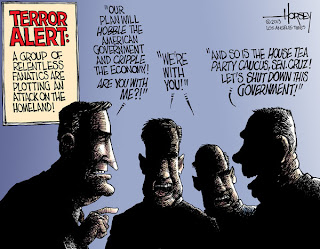 Posted by Gordon at 13:20
0 comments
Email ThisBlogThis!Share to TwitterShare to FacebookShare to Pinterest

I usually post this on Mondays, but I was driving and it slipped my mind 'til now. Just getting over truck lag.

Urp...
Posted by Gordon at 14:19
0 comments
Email ThisBlogThis!Share to TwitterShare to FacebookShare to Pinterest

Stupid is as stupid does

Some days, it DOES pay to chew through the restraints! There's stupid, and then there's double-dipped right-wing hater stupid. Do not drink anything while you read this lest it comes out yer nose and shorts out everything in front of you.

Mulberry, Florida -- 10 News has learned that controversial Gainesville pastor Terry Jones was arrested before he could carry out his plan to burn nearly 3,000 copies of the Islam holy book the Quran in Polk County on Wednesday afternoon.

Jones planned to burn the books at the county-owned Loyce E. Harpe Park in Mulberry, but was denied a permit, with officials saying he filed his request too late and that he does not have permission for an event of that magnitude.
...

But shortly before he planned to set the books on fire at the Mulberry park, Jones and associate pastor Marvin Wayne Sapp Jr. (aptly named! - G) were stopped. Their truck was towing a large barbecue smoker, which reportedly had copies of the Quran inside, already doused in kerosene.

"We couldn't allow that container to continue down the road, with the flammable liquid in that container," said Polk Co. Sheriff Grady Judd in a press conference. "It was flammable and it was dangerous."
...

Polk deputies took Jones and Sapp into custody at the Mulberry Pharmacy on N. Church Avenue on felony charges. They are both charged with unlawful conveyance of fuel.

Some "Christians", huh? Jesus woulda had taillights on his Quran bomb!

I hope this incident keeps this "pastor" busy for a while.
Posted by Gordon at 13:57
0 comments
Email ThisBlogThis!Share to TwitterShare to FacebookShare to Pinterest

Two Guys, a Girl and a Pita Place

Sam Bee, Bob Odenkirk and David Cross apologize to the citizens of Egypt for sending America's three stupidest people to their country.

What the hell was the State Department thinking, letting these yingyangs represent the United States abroad? Yeesh.
Posted by Gordon at 13:01
0 comments
Email ThisBlogThis!Share to TwitterShare to FacebookShare to Pinterest

Following up on yesterday's Headline of the Day. I love the picture! From Addicting Info. This is NOT from The Onion! 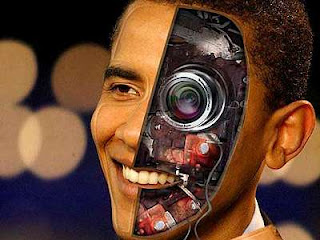 Alex Jones has decided that the United Nations (and Obama, of course) have embarked on a course of destabilizing and destroying countries so they can reduce the world to a primitive state and control it from “jetcopters” as Methuselah cyborgs.

I swear I am not making this up. Here’s the eight minute rant via Media Matters but the good part comes at 5:40:

Got that? Agenda 21 will put us all back into the Dark Ages so the UN is evil. Science will allow the “elitists” to live longer and merge man and machine so science is evil. Hollywood is a propaganda tool to sell collectivism so Hollywood and its flying red carpets (Huh?) are evil.

But if you’re “informed” like Alex Jones (no really! He said that!), you know the truth about all of these insidious plots! Normally, this would be the part where I make fun of Jones and anyone stupid enough to buy into anything he says but, honestly, I know when I’m outclassed. Who could possibly add anything to that rant to make it even more of a parody?

My hat is off to you, Mr. Jones. You are truly a work of art.

The upshot is that Obamacare covers Obama Derangement Syndrome but I think "Crazy Alex" has a terminal case. That's fine with me.
Posted by Gordon at 12:16
2 comments
Email ThisBlogThis!Share to TwitterShare to FacebookShare to Pinterest

Facepalm Moment of the Day

Note to Paul: Get "Political Aspirations" tattooed on your ass and kiss it good-bye after this suggestion. Yeesh.
Posted by Gordon at 15:26
0 comments
Email ThisBlogThis!Share to TwitterShare to FacebookShare to Pinterest

It's funny, 9/11 thinks. She feels weary, worn-out this morning, and it's strange because she believed that she would feel so much stronger than usual. After all, the new building is nearly done and, truth be told, it's so much better than the steel and concrete monstrosities that were leveled a dozen years ago. But, of course, one doesn't wish to do urban renovation through disaster and death.

She looks in a mirror and says to herself, "You think you'd be happy, at least a little." After all, while the candidates for mayor in New York City invoked her name more times than they needed to, including Bill de Blasio in his speech last night, she isn't tossed around as casually. She's been mostly absent from the discussion of bombing Syria. She was used to being paraded around, plastered with makeup, made a whore by Giuliani and Bush, imprisoned and roughly fucked by Cheney and Rumsfeld, burned with cigarettes and pissed on by Karl Rove, who jacked off into her hair after. Most of that ended a few years ago, of course, of course, although she pities her Libyan namesake who is little more than a fuck doll for conservatives who love having exotic tongue on their dicks and clits.
...

She stares back at the mirror. She can see herself. She's sure of that. "I'm not a ghost," she says. "Not yet."

She realizes, though, that she feels as if she is haunting the debate about Syria. She may not be called on by politicians or even many pundits to justify a new pseudo-war, a war lite, if you will. But she's sure that they've been ringing her door buzzer and running away. All of the terrible things done in her name - the Iraq nightmare, the Afghanistan slog, the breaking down of rights big and small, the drone attacks, the torture and indefinite detention, the surveillance state - hang there. She didn't want her existence to change so many things, but they did change. She didn't do it herself, but others say she caused them to do it. That's why, exhausted and used-up as she is, 9/11 feels it is her just punishment to take all who visit into her bed. Or, in the case of Rove, over the radiator, on the bathroom floor, or hanging in the closet.

There are those who tell 9/11 that she's suffered enough, that whatever implied sins she wishes to atone for have been fucked clean. They have it wrong, though. 9/11 says to them that it's not her sins that must be forgiven. It's that she is taking on the sins of others and trying to redeem them. She's just failed. She's failed, but she keeps trying.

I too wish she could quit being used the way she is, as a handy fuck piece for politicians.
Posted by Gordon at 13:44
0 comments
Email ThisBlogThis!Share to TwitterShare to FacebookShare to Pinterest

If it's Wednesday it must be Morford on Features He'd Like To See. Heh.

The new iPhones with iOS7 are packed, nay packed with amazing new features, colors, camera abilities, software doodads, and more. They’re nothing short of miraculous hunks of modern tech gloriousness. But they’re also, shockingly, missing a few key features we’d really like to see in future models. Such as:

1. Snicker Muffler. For every hipster under 40 who struggles to stifle a disbelieving chuckle when they see their Midwestern elders scooping heaps of freeze-dried, lint-colored misery from giant, Costco-sized tins of Maxwell House into pale mugs of watery sadness, and you’re all, like, “Really? You call that coffee? I pay six dollars for a single, hand-poured cup of Lost Guatemalan Ultra Orangutan Intestine Blend from Blue Bottle! [Snicker].”
...

19. Wasabi Detector. Special sensor detects just how much wasabi the sushi chef snuck under that piece of hamachi nigiri before you eat it and your face explodes. Phone will tear up accordingly, wave hand in front of itself in desperate fanning motion as Siri goes “OhmyGodohmyGodohmyGod” and reaches over and chugs all your sake.

22. Me. I wouldn't have one of those things up my ass if I had room for a boxcar.

Just ... go ...
Posted by Gordon at 13:18
0 comments
Email ThisBlogThis!Share to TwitterShare to FacebookShare to Pinterest

Alex Jones: Syria diplomacy a plot to extinguish humans so Obama and elitists can be cyborgs

When I see shit this stupid I don't know whether to laugh at the asshole or cry for the morons who think it must be true because you can't put it on the radio if it isn't.
Posted by Gordon at 13:05
0 comments
Email ThisBlogThis!Share to TwitterShare to FacebookShare to Pinterest

Home safe and sound. Between being burnt down to my socks from hangin' with all them 68-year-old party animals for three days and a helluva case of truck lag, I'm easin' back inta all the shit that's goin' on. This is as good a place to start as any: