No info but it looks like it's from the Transatlantic Sessions.

Thanks to Michael Martins.

Note: YouTube went down while I was posting this. If no video, please check back later.

Posted by Gordon at 00:00
2 comments
Email ThisBlogThis!Share to TwitterShare to FacebookShare to Pinterest

TBogg, many, many links.

The GOP is taking great pains to prove to the wimmins of America that, despite their fumbling attempts to transvaginal-wand love the gals for their own good, they are super cool with other things that the ladies want as long as it doesn’t have anything to do with equal pay (including for their own), or talking about their vaginas, or destroying the First Amendment with those aforementioned vaginas. Which leaves the GOP with only forcing approving of women having lots more babies who might grow up to be another Louie Gohmert, not holding down jobs to ensure that their kids don’t become manic bomb-building pixiechildren, and probably taking time out to watch a Lifetime movie or two during the week as long as it doesn’t disrupt sammich making.

So this week the GOP is sending everyone to Camp Justwannacuddle to demystify the baffling ways of these mysterious kitchen-dwelling creatures so that they don’t startle and scare them away when attempting to woo them for their valuable votes and trust and also probably their boobs.

I think it was Jon Stewart or Stephen Colbert who said the GOP approached women and the women got a restraining order. Heh.

The Repugs' idea of "outreach" is to keep the ideology the same but on the down low while they sweet-talk the wimmens with lies. The Repugs are gonna get their asses handed to them. Rightly so.

Posted by Gordon at 15:01
0 comments
Email ThisBlogThis!Share to TwitterShare to FacebookShare to Pinterest

Lest we think he was universally admired as he should be. 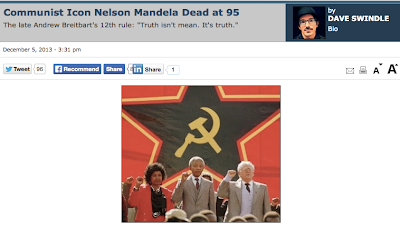 Mother Jones, with links and video.

Yes, some of the reactions to Nelson Mandela's death have been less than ideal. As a few have pointed out, the comments on, say, this National Review blog post or Sen. Ted Cruz's Facebook page regarding Mandela (the guy was a commie, racist murderer, yada yada) are fairly disgusting. To be fair, some commenters on the internet are always nasty and dumb, whatever the topic. But how about people who (maybe?) should know better? Here are the worst reactions to Mandela's passing, courtesy of…

1. Rick Santorum: With a straight face, the former Republican senator and failed presidential candidate, who is now making pro-Christian movies, compared Mandela's long struggle against the apartheid regime to Republicans' battle against…Obamacare: "He was fighting against some…great injustice," Santorum said on Fox News yesterday, "and I would make the argument that we have a great injustice going on right now in this country with an ever-increasing size of government that is taking over and controlling people's lives, and Obamacare is front and center in that."

His Mixture is extra Frothy on that one.

And for good measure:

That's a little off. His fans are crazy. This time they're meaner, nastier, and dumber than usual.

Posted by Gordon at 13:43
0 comments
Email ThisBlogThis!Share to TwitterShare to FacebookShare to Pinterest 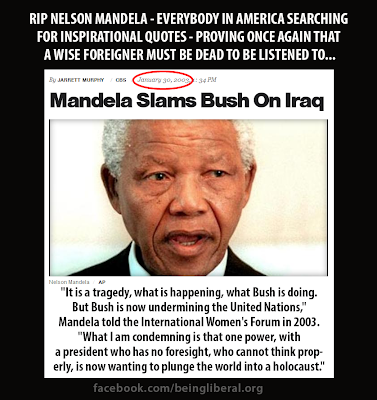 There are many people in America who have no moral right to quote Nelson Mandela and ride the sudden wave of interest about him... If you have ever been supporting George W. Bush and his War in Iraq you are entitled to share Mandela's memes ONLY with a public admission that you were wrong... The best way to honor Mandela's Legacy would be to listen to wise men in the USA AND around the World BEFORE they die...

Fat fuckin' chance.
Posted by Gordon at 13:29
3 comments
Email ThisBlogThis!Share to TwitterShare to FacebookShare to Pinterest

Washington, DC December 4, 2013 — The federal scientist whose sightings of drowned polar bears galvanized public understanding of climate change in the Arctic has retired as part of a settlement of his whistleblower complaint against the U.S. Department of Interior. The agreement, posted today by Public Employees for Environmental Responsibility (PEER), ends a benighted attempt to officially punish and intimidate scientists for the political implications of their work.
...

Following its inability to identify any scientific error, BOEM ultimately issued Dr. Monnett a letter of reprimand, the lowest level of discipline, for a series of five emails he sent to outside individuals in 2007 and 2008 – actions the agency had known about since before the IG investigation but never acted upon. Through PEER, Dr. Monnett filed a whistleblower complaint with the U.S. Office of Special Counsel (OSC) on several grounds, including that the emails documented BOEM legal violations in trying to ram through Arctic offshore drilling permits that were later thrown out in court.
...

"This agency attempted to silence me, discredit me and our work and send a chilling message to other scientists at a key time when permits for oil and gas exploration in the Arctic were being considered. They failed on the first two goals, but I believe that what they did to me did make others afraid to speak up, even internally. Following over two years of hell for me and my family, my name has been cleared and the accusations against the scientific findings in our paper have been shown to be groundless" Monnett said. "However, I can no longer in good conscience work for an agency that promotes dishonesty, punishes those who actually stand up for scientific integrity, and that cannot tolerate scientific work not pre-shaped to serve its agenda." (my em)
...

[...] "If there was any doubt, the five-year employment ban on such a well-qualified, award-winning scientist makes it unmistakably clear that independent scientific views are not welcome in any corner of the Department of Interior."

Score one tiny one for us "warmers". The Department of the Interior needs a thorough cleansing.
Posted by Gordon at 13:42
0 comments
Email ThisBlogThis!Share to TwitterShare to FacebookShare to Pinterest

A 'must read' by William Rivers Pitt.

Heinrich Boere, known Nazi, known murderer, known collaborator with the filthiest tide to ever wash up on the human shore, is dead. He was not the worst of them, but he was willingly one of them. He did not die free, but in fetters on a prison bed without even his own mind left to him. More than some would say it was a better death than he deserved. Most would say that justice, at least to some degree, was finally served.
...

It was George Santayana who said, "Those who cannot remember the past are condemned to repeat it." Heinrich Boere is dead. Long live Heinrich Boere.

If it was up to me, neo-Nazis and those who, by any name, espouse Nazi thought or display Nazi symbols would be shot on sight, 1st Amendment be damned.
Posted by Gordon at 13:22
2 comments
Email ThisBlogThis!Share to TwitterShare to FacebookShare to Pinterest

Thank goodness, but there was never any doubt it would fail to succeed. Maybe the colossally overpaid Repug pols could go on to something more worthwhile now. Like Benghazi. Heh.
Posted by Gordon at 14:16
0 comments
Email ThisBlogThis!Share to TwitterShare to FacebookShare to Pinterest

John Boehner Gets Health Insurance Under Obamacare
Hell freezes over.

Afghan Opium Harvest Up 50%
Your tax dollars at work.

That's a helluva lot better use than some of our tax money goes for, like House GOP salaries.
Posted by Gordon at 11:53
2 comments
Email ThisBlogThis!Share to TwitterShare to FacebookShare to Pinterest
Newer Posts Older Posts Home
Subscribe to: Posts (Atom)