From the 2013 Legacy / Sony Legacy album, To All the Girls

After 33 years of rightward and downward slide, it's about fuckin' time. E.J. Dionne.

The center of gravity in American politics moved left in Tuesday’s off-year elections.

Republicans took a big step back from the tea party. An ebullient progressive was elected mayor of New York City. And a Democrat was elected governor of Virginia after campaigning unapologetically as a supporter of gun control and a liberal on social issues.
...

And in the one direct intraparty fight over the GOP’s future, a tea party candidate lost a primary in Alabama to a more traditional conservative. A telling distinction between the victor, Bradley Byrne, and the defeated Dean Young: Byrne said that Obama was born in the United States; Young suggested the president was born in Kenya.

Young’s persistent “birtherism” is a reminder of how far right the American political discussion veered after the elections of 2009 and the midterms of 2010. The pendulum is swinging back.

I hope it swings fast and seizes solid somewhat left of center.

Republicans would be wiser to pay attention to the fact that McAuliffe re-created the coalition that twice elected Obama. When Democrats lost Virginia in 2009, Obama supporters stayed home in large numbers. This time, the electorate was significantly more Democratic, and the African American share of the vote rose sharply. In next year’s midterms, Republicans cannot count on the sort of Democratic demobilization that was helpful to them in 2010.

To say that this election nudged the nation leftward is not to claim a sudden mandate for liberalism. But it is to insist that the center ground in American politics is a long way from where it was three years ago — and that if there is a new populism in the country, it is now speaking with a decidedly progressive accent.

Shorter: We're winning. Continue the march.
Posted by Gordon at 14:41
2 comments
Email ThisBlogThis!Share to TwitterShare to FacebookShare to Pinterest

The Conservative March Toward a Society of Sociopaths

Last night when discussing Stan and some of what I refer to as his asinine political beliefs, it occurred to me—Stan is exactly how Republicans want Americans to behave.

And Stan is a sociopath.

He’s a white male, strongly opposed to most other races and immigrants. Believes every single far right-wing economic theory imaginable and actually cited Argentina as a “beacon for true capitalism.” He has no remorse for others, seems to live in a world where he’s the focal point but he presents himself as extremely charming and personable when you first meet him. He has no problem ignoring social ethics or morals if it benefits his self interest. He’s told my friend that people should only worry about themselves, and not care about the struggles of others. That in life, self interests should trump everything else.
...

See, Stan is exactly the kind of person Republicans want to create.
...

Which leads us to the rapidly de-evolving Republican party. A party that doesn’t care about the environment, health care access for Americans, children, education, the well-being of our military or the poor.

They only care about themselves and how much they can possess. People who place value on inanimate objects like guns or money before human beings. Then nothing you can tell these people will convince them of anything, because your opinion doesn’t matter
.
Because the sociopath isn’t concerned about what you, I or anyone else thinks of them—only what they think of themselves. Which is why any type of disgusting behavior they exhibit is perfectly acceptable. That behavior got them something that they wanted—and to a sociopath their own self interests are all that really matter.

And that’s exactly the type of society conservatives are trying to march us toward.


And that's exactly why we're here and what we're trying to prevent. I think after 30 years of right-wing bullshit, folks are catching on and we're gaining steam. They think they've won and are getting more and more egregious in trying to undo the societal gains of the last 75 years. They're not even trying to hide it any more. It's finally out in the light of day and people don't like it. Sunlight is a great cleanser.

I saw this somewhere the other day: "The next Republican President hasn't been born yet". Fine with me.
Posted by Gordon at 12:58
2 comments
Email ThisBlogThis!Share to TwitterShare to FacebookShare to Pinterest

Who knew Ken Cuccinelli had a secret plan to force oust Bob McDonnell?

They promised it's there somewhere, but the photo was too good not to share. Heh. 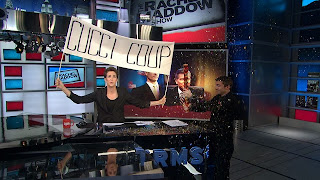 Posted by Gordon at 12:05
0 comments
Email ThisBlogThis!Share to TwitterShare to FacebookShare to Pinterest

How to die long before Christmas

It was 81 degrees outside. It was still early October, not even yet time to set clocks back an hour or pay way too much for a pumpkin in the city. Nearly three months stood like a lump of crushed hopes between that particular moment and Christmas – and yet, there they were, rows of holiday fare awaiting their rotation in the cycle of commercial life, because, well, why the hell not? Does anyone even notice or care anymore? Drug stores churn through this sort of prefab holiday crap like crack anyway, and candy canes have the shelf life of nuclear fuel rods. Might as well just leave them out all year long.
...

Two days after Halloween, I stood, surrounded by walking skulls and candles, ritual and death, corrected.

It was Dia de los Muertos, of course, swarming through SF’s Mission district like a breath of fresh, funky, coffin-like air, a quirky, morbid, wonderful slap in the face to every American holiday ritual in existence, along with the ruthless machinery of capitalism that define them.

Also: Not a single megastore offering a special Day of the Dead deal on big-screen TVs. No tasteful, sweatshop-made ornaments from Pottery Barn. No special drinks, no immature misinterpretations of Jesus’ birth or death, no reindeer sweaters. It was sort of miraculous.

Instead, Dia de los Meurtos is, to my imperfect understanding, a time to honor the dead, respect your ancestors and pay homage to those loved ones you’ve lost, all during the few days when it’s believed the veil separating the living from the dead is thinnest. There are cacophonous processionals, offerings, marigolds galore (the Aztec flower of death, to which souls are drawn), photos of the deceased everywhere, altars and shrines from sublime to silly, mementos and trinkets and sugar skulls in abundance. It’s sacred, potent, playful, deeply moving. You know, just like Christmas never was.

But it’s also, if I understand it correctly, a day to sort of mock Death itself, that skinny, weak bag o’ bones who couldn’t possibly carry you away right now, and who doesn’t scare you not one bit, even though he totally does.

Is that not refreshing? No wonder American commerce hasn’t swarmed all over this idiosyncratic ritual. Unlike Mexico (and Brazil, Spain, and many others) we haven’t really developed the means to handle death or the afterlife with anything other than fear and denial. Halloween is as close as we get, and that’s become far more about kids gorging on candy and adults gorging on cocktails. The old pagan rituals? The Celtic harvest festivals? Not a clue.

My sentiment exactly. Dia de los Muertos makes more spiritual sense than Halloween, and is a better celebration than almost any of our commercially-driven "holidays".
Posted by Gordon at 13:50
7 comments
Email ThisBlogThis!Share to TwitterShare to FacebookShare to Pinterest

When we last checked in on la famiglia Cheney, family patriarch and Undead Thing Dick Cheney was hitting the gasbag shows and flogging his heart surgery book The Heart Is A Lonely Hunter Who Shoots You In the Face. Grande dame and soft-core lesbian fan-fic author Lynn Cheney was going Full Metal Carrie on Alan Simpson at some Wyoming society event and, yes Wyoming does too have society events so stop laughing right this minute mister or be forever persona non grata at the annual Greater Laramie Sheepherder’s Embraceable Ewe Cotillion and Tractor Pull.

But what of daughter Liz’s campaign to return, Odysseus-like, to her ancestral home in McLean, VA. as well as join the Senate as the distaff version of Ted Cruz … but without the charm?

Lizzie has gone from "Daddy's 5th Deferment" to "Serious Adult Daddy Issues". Looks like the Wyomingstanians ain't having it.
Posted by Gordon at 14:06
3 comments
Email ThisBlogThis!Share to TwitterShare to FacebookShare to Pinterest

From The Guardian via Raw Story.

So, it shouldn’t come as a surprise that the first Transportation Security Administration (TSA) agent to be killed in the line of duty was not slain by an al-Qaida terrorist, but rather by an American with a gun.
...

Now, of course, if the shooter had screamed “Allah Akbar” as he needlessly took the life of TSA agent Gerardo Hernandez, or if he had had links to an al-Qaida terror cell, there’d be no question about how to describe this incident.

As far as I'm concerned, the guy was a terrorist in a cell headed by the likes of Glenn Beck and Alex Jones. They should be up on charges as accessories before the fact.
Posted by Gordon at 15:27
2 comments
Email ThisBlogThis!Share to TwitterShare to FacebookShare to Pinterest

Headline and Quote of the Day

Food stamp cuts are ideological, not fiscal: Republicans make the poor pay to balance the budget

“The capitalists can always buy themselves out of any crises, as long as they make the workers pay.”

One more in a long list of reasons the GOP needs to die.
Posted by Gordon at 15:17
0 comments
Email ThisBlogThis!Share to TwitterShare to FacebookShare to Pinterest

Couldn'ta said it better myself... 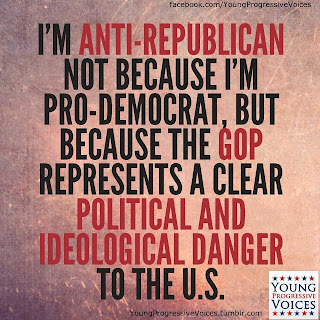 A tip o' the Brain to Being Liberal.

Posted by Gordon at 12:39
0 comments
Email ThisBlogThis!Share to TwitterShare to FacebookShare to Pinterest

Republicans Outraged That Obamacare Is Destroying America
And isn't rolling out smoothly enough.

Rand Paul Accused of Plagiarizing Entire Section of His Latest Book
Even titled it “The Fountainhead”.

Marijuana Likely to Be Decriminalized In Washington, D.C. by February
Just in time for Choom Gang reunion at White House.

Man Drives From New York to LA in Under Twenty-Nine Hours
Then drives from Brentwood to West Hollywood in an hour and forty minutes.