The Kochs, A Nazi Past, Oil & The Foundation of The Right

In the Koch family’s alliance with American Republicans: conservatives, constitutionalists, racists, tea partiers, military hawks, drooling fearful populists… the Koch family has found an alliance in the continued homogenization of society. Republicans gain purity in a world they have always viewed as a dirty, impure space and corporate empires like Koch Industries, built under the care of Nazi Germany and Stalin’s Soviet Union, rise to lead the police state.

When it comes to the "vast right-wing conspiracy" I have no trouble believing all this.
Posted by Gordon at 12:47
0 comments
Email ThisBlogThis!Share to TwitterShare to FacebookShare to Pinterest

Snippet of the Day

Uh-oh, without even knowing how he did it, because that is what happens when you wander through the monkeyhouse blindfolded, Tea Party fave-rave Tailgunner Ted Cruz has gotten himself crossways with his fellow nutballs in the House because he has declined to produce magic sparkle ponies from out of his arse.

Heh. Everyone wants a pony, but...
Posted by Gordon at 11:42
4 comments
Email ThisBlogThis!Share to TwitterShare to FacebookShare to Pinterest 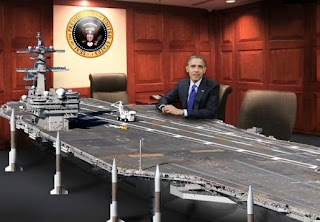 From an op-ed in that commie rag, The Wall St. Journal:

Republicans must threaten to crash their Zeros into the aircraft carrier of ObamaCare. Their demand is that the House pair the "must pass" CR or the debt limit with defunding the health-care bill. Kamikaze missions rarely turn out well, least of all for the pilots.
...

The kamikazes could end up ensuring the return of all-Democratic rule.

Ah, so. WSJ got THAT right - the GOP are ALL a buncha Zeroes. Sayo-fuckin-nara assholes. I wish you all a speedy trip straight down with a big splash into oblivion.

Gee, they say that last sentence like it's a bad thing. Heh.

Posted by Gordon at 13:24
0 comments
Email ThisBlogThis!Share to TwitterShare to FacebookShare to Pinterest

Stewart: Republican diplomacy ‘is like a glory h*le: Just stick it in and you worry about the consequences later’

Go watch Stewart do Miss Lindsey to a T damn near to her fainting couch! 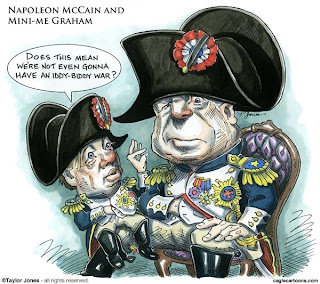 Posted by Gordon at 13:05
4 comments
Email ThisBlogThis!Share to TwitterShare to FacebookShare to Pinterest

I don’t know about you, but I’m not very interested in being lectured that Bashar al-Assad has no real intention of giving up his chemical weapons by the very same people who a decade ago were pushing this country into war—and having the deranged gall to call the rest of us unpatriotic—on the argument that there was no possible way a monster like Saddam Hussein had given up his chemical weapons. Barack Obama has been forced to spend about 70 percent of his presidential energies trying to repair crises foreign and domestic that these people created, and forced to do so against their iron opposition on all fronts; and now that he’s achieved a diplomatic breakthrough, they have the audacity to argue that he sold America out to Vladimir Putin? It’s staggering and sickening.
...

The second question concerns Assad. Conservatives are now asserting that this deal means Assad has gotten away with it; that he used chemical weapons and will now pay no price. What does that even mean? If he even partly or mostly honors the terms of the deal, he’s paid a price. I suppose the critics really mean that Assad paid no military price, and strictly speaking that’s true. But do these critics really think Assad is sitting in Damascus laughing? He was afraid the world’s largest and best military was going to bomb him. And I’d bet he knows all too clearly that if he uses them again, he will be bombed. If Assad is mad enough to use them again, Obama won’t mess with Congress or even Russia. He’ll be credited by most observers—except America’s enemies and the Republican Party; food for thought there (my em)—for having shown restraint the first time, and more people will agree at that point that Assad must be punished
...

What Obama has screwed up on Syria is process stuff. He’s changed his mind. That’s unforgivable, in the Washington Village. It shows no “resolve.” Well, Bush showed resolve. I’ll give him that. And as he dragged us into a full-out war premised on lies that were crafted to shift an originally skeptical public sentiment in his favor, the pundits largely applauded. Obama has spoken honestly to the American people, obeyed their strong majority view, and secured a deal that for the moment represents the outer limits of the possibility of doing good in Syria. The brickbats thrown by the very people who turned the world against us are not only hard to take seriously, they’re a moral offense.

McCain feels a ‘little lonely’ because nobody wants to attack Syria

Suck it, Grampa Walnuts. It must be an awful feeling to wave your pistol around, holler "follow me!", go over the top and get halfway across no-man's-land, turn to check on your devoted troops and [crickets]. The devoted troops are back in the trench divvying up your liquor ration and dry socks. Heh.
Posted by Gordon at 13:25
4 comments
Email ThisBlogThis!Share to TwitterShare to FacebookShare to Pinterest

There's Wall St. "thinking" for you!

Balloon Crossing of Atlantic Fails
But some kid in Newfoundland has a great birthday party.

Posted by Gordon at 12:49
0 comments
Email ThisBlogThis!Share to TwitterShare to FacebookShare to Pinterest

If a motorcycle was in the same state of disrepair as the GOP. we would say to remove the gas cap and slip a new motorcycle under it.
Posted by Gordon at 12:28
2 comments
Email ThisBlogThis!Share to TwitterShare to FacebookShare to Pinterest
Newer Posts Older Posts Home
Subscribe to: Posts (Atom)