Neil deGrasse Tyson vs. the right: “Cosmos,” Christians, and the battle for American science

He's doing a fine job of it and it's about fucking time.

The religious right has been freaking out about Neil deGrasse Tyson’s “Cosmos” for what feels like an eternity. And, while the theological complaints seem laughable for their rancor and predictability, it’s time we thought harder about what they represent, because the Christian right’s “Cosmos” agita actually indicates a far deeper problem in religious conservatism — the selective acceptance of Enlightenment values. Religious conservatives have selectively adopted the legacy of liberal Enlightenment, from free speech to science, and jettisoned it when it does not suit their narrow ideological aims.

The scientific consensus about global warming must be untrue, because, as Dr. Innes writes in “Left, Right and Christ,” the world is “not a glass ornament that we might accidentally destroy … we are not capable of destroying it, whether by nuclear weapons or carbon emissions.” [...]

He's right. We will not destroy the Earth. The sun will do that in about 5 billion years. We can, however, destroy life on earth as we know it.

There's a lot more to read in this piece and video too.

Sheldon Cooper on "The Big Bang Theory" described religion perfectly as "Pre-enlightenment mythology" and I won't even try to improve on that.
Posted by Gordon at 15:23
4 comments
Email ThisBlogThis!Share to TwitterShare to FacebookShare to Pinterest

"This is a country now at war with itself"

Charlie Pierce on the proliferation of gun violence.

This is a country at war with itself because its ruling elite is too cowed, or too well-bribed, or too cowardly to recognize that there are people who are getting rich arming both sides, because the only thing that stops a bad guy with a gun is a good guy with a gun, so you make sure that it's easy for the bad guys to get guns in order to make millions selling the guns to the good guys. This is a dynamic not unfamiliar to the people in countries where brushfire conflicts and civil wars are kept alive because distant people are making a buck off them. In Africa, war is made over diamonds and rare earths. In South America, war is made over cocaine. Here, for any number of reasons - because Adam Lanza went crazy or because Elliot Rodger couldn't get laid - and the only constant in all those wars is the fact somebody gets rich arming both sides.
...

It is a guerrilla war, fought on darkened streets against children in hoodies brandishing Skittles, against children in cars who play their music too loudly, against evanescent fears and the ghosts born of ancient prejudice and cultivated dread. Its battles are sudden but, sadly, no longer surprising. The whole country is the battleground now because cynical people have made it so. Our movie theaters are our Wheatfields, our Peach Orchards, or our Bloody Lanes. A quiet college campus is the Hornet's Nest. An elementary school is Cemetery Ridge. Those are the killing zones. The enemy, we are told, is everywhere, and nowhere. This is the country that Wayne LaPierre, that malignant profiteer, talks about when he says, as he did at a conservative conference last spring:

Go read it if you want to. It makes me sick. And angry.

So that is Memorial Day this year, in a country in which its citizens are encouraged to make war on each other because not enough people care enough to stop it. There are more flowers in more places and there is no peace in sight, because we have chosen as a country to slake our appetite for it with blood. The dead are not honored in this war. Only the instrumentality of their murder is, god help us all.

Shorter: It's always about the Benjamins.

I like guns. I own guns. Shooting is a skill I learned in the Marine Corps. Shooting is fun. I pray to all the goddam gods that I never have to use one against another human being.
Posted by Gordon at 14:47
4 comments
Email ThisBlogThis!Share to TwitterShare to FacebookShare to Pinterest 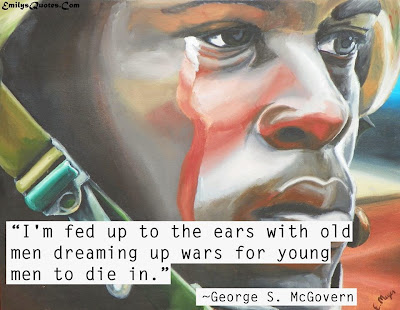 Posted by Gordon at 14:44
2 comments
Email ThisBlogThis!Share to TwitterShare to FacebookShare to Pinterest

Same Republicans Outraged Over Treatment of Veterans Filibustered Against Better Health Care for Veterans in February
Including treatment for memory loss.

No memory loss - when the Veterans cease to be profit generators for the war profiteers and become overhead, it's time to cut back. It's just business. Grrrrrr...

Report: Climate Change Could Sink Statue of Liberty
Suggests moving it to Kansas.

Some irony is simply too horrid to contemplate.

AT&T to Buy DirecTV for $48 Billion
It's the perfect synergy of massive layoffs and world domination.