Seymour Hersh has a new article out about the coming (presumably) invasion of Iran and a couple things struck me.

Iran's geography would also complicate an air war. The senior military official said that, when it came to air strikes, "this is not Iraq," which is fairly flat, except in the northeast. "Much of Iran is akin to Afghanistan in terms of topography and flight mapping - a pretty tough target," the military official said. Over rugged terrain, planes have to come in closer, and "Iran has a lot of mature air-defense systems and networks," he said. "Global operations are always risky, and if we go down that road we have to be prepared to follow up with ground troops."

The U.S. Navy has a separate set of concerns. Iran has more than seven hundred undeclared dock and port facilities along its Persian Gulf coast. The small ports, known as "invisible piers," were constructed two decades ago by Iran's Revolutionary Guards to accommodate small private boats used for smuggling. (The Guards relied on smuggling to finance their activities and enrich themselves.) The ports, an Iran expert who advises the U.S. government told me, provide "the infrastructure to enable the Guards to go after American aircraft carriers with suicide water bombers" - small vessels loaded with high explosives. He said that the Iranians have conducted exercises in the Strait of Hormuz, the narrow channel linking the Persian Gulf to the Arabian Sea and then on to the Indian Ocean. The strait is regularly traversed by oil tankers, in which a thousand small Iranian boats simulated attacks on American ships. "That would be the hardest problem we'd face in the water: a thousand small targets weaving in and out among our ships." [my ems]

Take a look at the map below in light of reading the above. 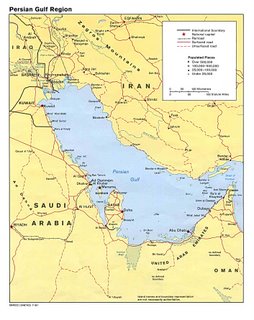 To quote an old song, 'do you see what I see'? You don't need to be a professor at the Naval Academy or the Army War College to see the difficulty of defending a naval force in the Gulf, let alone getting other units in and out by sea. Iran would be our Waterloo. And that's not even asking the question, 'where would we get these extra ground troops from'?

[If it helps, think of the Strait of Hormuz as the road from Baghdad Airport to the Green Zone, only wet. - F ]

Soto has a take on the interplay between the flag officers and the civilians at the Pentagon.

Thanks to Steve Soto for the Hersh link.
Map courtesy of the University of Texas Libraries.

Posted by Fixer at 09:18
Email ThisBlogThis!Share to TwitterShare to FacebookShare to Pinterest