As regular readers of the Brain will know, the Owens Valley in Eastern California is one of my favorite places. Thanks to the end of a long court process, the valley is going to get some long overdue environmental relief today. From the LATimes with photos and videos:

The largest river habitat restoration effort ever attempted in the West (my em) will launch with Villaraigosa's push of a button, opening a steel gate at a dam that has been diverting the Lower Owens' water into the Los Angeles Aqueduct since 1913.

If all goes according to plan, within five years nature will transform the revived river's lazy loops into a lush serpentine oasis of willows and cottonwood trees, wetlands for waterfowl and shorebirds and warm water fisheries for bass, catfish, frogs and crayfish.

Please read the rest and watch the videos.

Rivers in the Desert by Margaret Leslie Davis

Water and the California Dream by David Carle

As Mark Twain once said, and California has taken to heart, "Whisky's fer drinkin'. Water's fer fightin' over."

Man, we caught so many trout out of the Owens River one day that we nearly got nauseous cleaning 'em all in the bathtub of our hotel...

Rainbows and browns till our arms were tired. Never seen anything like it.

Not sure those hotel maids ever saw anything like that, either.

Next time, PB, check for this feature, common amongst the better accommodations in the area: 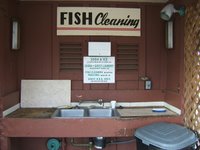 Just look for a lotta cats hangin' around!
Posted by Gordon at 13:25
Email ThisBlogThis!Share to TwitterShare to FacebookShare to Pinterest