He should only take the scenic route...

The office of US Vice President Dick Cheney says he will travel to Australia and Japan next month for talks on Asian security and the global war against terrorism.

Mr Cheney's official tour will also include visiting US troops in Guam.

If The Dick wants to make a big hit with the troops on Guam, he should be seen landing in the lagoon in one of these: 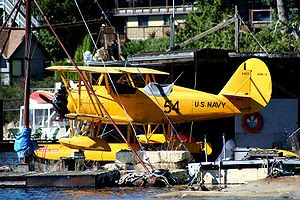 That's an N3N-3, a fine, reliable, US Navy trainer in a rare floatplane configuration. Sorry about the picture, but there aren't too many pictures of them actually flying. At least that one hasn't sunk yet!

Listen to it roar!

A 7-G pullout can be accomplished at 174 knots (200 mph) without approaching the 9-Gs listed as the "do not exceed" limit. The rugged construction of the N3N made it an extremely popular crop duster after the war.

No specs on range. Maybe none of 'em ever went far enough to find out. Heh. Who cares? It can land anywhere!

I personally think it would do a lot for Cheney's reputation to make a long overwater flight in a not-exactly-brand-new, yet proven, single engine aircraft. Australia to Japan and on to Guam oughta do it.

Look what such a flight did for Amelia Earhart. And she had two engines and got to sit inside. Our tough-guy Veep don't need none of that sissy shit. In the spirit of gender equality, we should hope The Dick catches up with Amelia.

Happy landings, Dick. Maybe do a coupla 10G pullouts over the troops to dazzle 'em, if ya make it that far.
Posted by Gordon at 16:24
Email ThisBlogThis!Share to TwitterShare to FacebookShare to Pinterest