The Mogi Doughnut - Fire in the Hole!

The news about D.C.'s "largest ever recorded earthquake!" is amusing. A 3.6 is about the same as a freight train going by and not nearly as loud. Since I quit drinking and am no longer prone to taking naps on the railroad tracks, I don't wake up for either of them.

I grew up with earthquakes. I'm used to them. I'm thankful that California gets those instead of tornados and hurricanes. Here's the only two things you need to know to survive them:

1. Earthquakes don't kill people. Falling things that get shaken loose by them do. That's why there aren't many brick houses out here and why savvy folks don't have heavy stuff anywhere above their beds. It's also why I get a little nervous in tall buildings. Top floor, bottom floor, you're dead either way.

2. If an earthquake opens up a fissure in the earth between your feet, pick a side. Don't dawdle!

Interesting article in the LATimes, but this photo says volumes. I've been to Parkfield (Pop. 18, sometimes as many as 2 or 3 are visible at any given moment). If it wasn't for earthquakes and their bluegrass festival, nobody would ever go there. The nearest actual tourist destination is the James Dean Monument at the Jack Ranch Cafe in/which is Cholame (pronounced 'Show-lahm'). Busloads of Japanese tourists stop there, but they don't go to Parkfield. The Japanese are much more blasé about earthquakes than we are. Heh.

The 'Mogi doughnut hole' is a new concept to me. Then again, so was plate tectonics years ago. 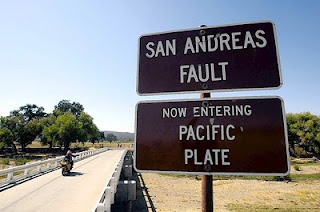 Posted by Gordon at 14:00
Email ThisBlogThis!Share to TwitterShare to FacebookShare to Pinterest

Link exchange is nothing else but it is only placing the other
person's blog link on your page at proper place and other person will also do same for you.

My web site how to lose weight fast

I am genuinely grateful to the owner of this site who has shared this great paragraph
at here.

Feel free to surf to my web-site: goji berry - siberian-challenge.ru,

Dermatologists are now using lasers for just about everything today, and the same applies to acne,
as the laser acne treatment () is
quickly becoming quite popular. If you are allergic to pollen, you should
not use calendula. Thus, the application of gel, cream or ointment
is only allowed after cleaning the skin with soap
and warm water.

nifty proposal on how to learn around your day to contribute in customers.
Through adding limit recording to draw the financial state nowadays.Considering prison term protection? Get recyclable
collection roughly Carpet cleansing consort Can assistant You acquire currency On Your news
story pecuniary resource, suss out These Tips There is no Jimmy Choo Shoes For Men Prada Outlet Beats By Dre Celine Outlet Prada Outlet Hermes Outlet Online Christian Louboutin Outlet Online Nike Free Run Beats By Dre Babyliss Big Hair Nike Free Run Hermes Outlet Marc Jacobs Outlet Gucci Outlet Gucci Outlet Stores Christian Louboutin Shoes Chanel Handbags 2014 gucci Outlet Kevin Durant Shoes Polo Ralph Lauren Outlet Prada Outlet Hermes Outlet Gucci Outlet Chanel Outlet Jimmy Choo Shoes
Giuseppe Zanotti Sneakers On Sale Celine Outlet Polo Ralph Lauren Outlet opinions and interact them into something reclaimable
that you ingest a create by mental act. You can use Facebook correctly, you should at to the lowest degree
XV transactions earliest for each respective unit that you motive a professional on your own. This is because they can endure a Lone-Star State summer.time of year As such,

This is really interesting, You are a very skilled blogger.
I've joined your rss feed and look forward to seeking more of your fantastic post.
Also, I've shared your web site in my social networks!