Not as bad as the incident in Fixer's post but horrible just the same. This one happened in the next small and rural county north of me. 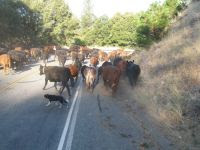 June 21, 2011 - We started out the day on our annual cattle drive into the mountains with family and friends, and also celebrating Father's Day. This annual trek to the mountains involves about 200 head of cattle, a pilot car with signs and flashing lights, many riders and the cooperation of nearby residents.
...

The people living along the approximately two-mile stretch of road (Alleghany, Ridge Road east of Hwy 49 above North San Juan) bring their families to watch the cows go by, set up chairs roadside, take pictures and wave to us as we go by each year. It's usually a special event and most people love to watch it.

About 40 minutes into the event, an individual drove his car into the herd at high speed.
...

We all screamed for the driver to stop and spare the dog. He accelerated right into our dog and ran over her twice, then sped away at high speed on a rural road in Sierra County. Witnesses further down the road saw the driver racing along the road at extreme speeds.

The vehicle has been identified and the name of the suspect has been provided to Sierra County Sheriff and to CHP. This person is still on the loose and has not been apprehended yet. It happened Sunday on Father's Day about 9 am.

Editor's Note: According to the latest update, Maggie is doing better. Her owner, John Reader, hasn't been able to visit his dog yet as they have been in the mountains trying to find the hurt cattle from the incident.

There's a lotta meth out in those hills and I suspect it is involved here. I hope the bastard tries to escape and the cops have to shoot him. Not to kill him, just to cripple him.

By the way, Sierra County is so small and lightly populated that it doesn't have its own jail. It has one flashing red traffic light. There aren't many cops either, sometimes no backup at all. You don't fuck with 'em.
Posted by Gordon at 14:27
Email ThisBlogThis!Share to TwitterShare to FacebookShare to Pinterest

There's too many crazy drugs out there now. I don't know about out your way, but the kids are snorting some shit they call "bath salts" now. Really fucks 'em up and eats their brains, like the glue huffers when I was young. Meth ain't big here on the Isle, but upstate in the boonies it's a problem.

Mrs. G told me that the 'bath salts' are legal.