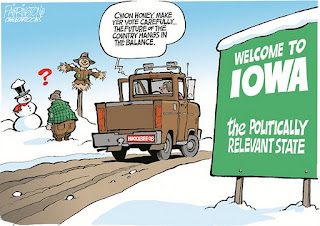 The Real Housewives Of Iowa

And finally, with reality TV stars, radio-talk-show hosts, and television pundits making up roughly 90 percent of the current GOP presidential field--or those who led in polls at one time and flirted with entering the race (see Palin, Sarah and Trump, megalomaniac)-- entertainment and politics in the United States have finally gone from symbiotic to simply redundant.
...

First there is the Santorum Surge--which I'd advise you not to try and google.

But with bribery in the air, gaffes galore and Ron Paul perhaps asked to share his theories on The Bell Curve, we are once again reminded of the wisdom of the great H.L. Mencken, who once said of campaigns in general, "A national political campaign is better than the best circus ever heard of, with a mass baptism and a couple of hangings thrown in."

It will be good to get the right-wing christowhacko three-ringer and the national hangover outta the way on the first full business day of the New Year.
Posted by Gordon at 12:53
Email ThisBlogThis!Share to TwitterShare to FacebookShare to Pinterest