Subtitle: "Neocons Get Knickers In A Twist, Call For 'Nuke Tehran!'"

Despite mounting tensions around the strategic oil transit point at the Strait of Hormuz, U.S. ships have in recent weeks rescued the crews of two Iranian ships — one from pirates and the other stranded when it broke down. But Iran doesn’t seem to be in a mood to respond in kind. U.S. military officials told CNN that the day after the crew of the Iranian fishing boat was rescued from a weeks-long pirate takeover, Iranian motorboats harassed two U.S. ships near the Strait. The boats raised alarms by rapidly approaching both the USS New Orleans and U.S. Coast Guard cutter Adak, but no shots were fired in either incident and the Iranian boats broke away. Watch the Iranian boats near the New Orleans here:

The Iranian boats fled at high speed when 800 heavily armed Marines jumped into the water and began chasing them.

I mighta made part of that up...

Seriously, folks, this looks like a day on the lake. I'm sure the orders to the Iranian sailors went something like, "OK, boys, we're messin' with the world press today with a show of force so here's whatcher gonna do - run them things as fast as they'll go right at two of the least heavily armed ships in the American fleet and don't forget to shear off before you wreck or they shoot at you. Just scare the shit outta their pussy warmonger politicians back home. Don't worry about that battalion of Marines lookin' over their sights at you, they're not scared and have good fire discipline anyway. Have fun."

The American kids were probably thinking something like, "Wow, nice boats! I betcha we could pick up girls back home at Lake Suckamadickee with one of those!"

In any case, our guys were ready for 'em: 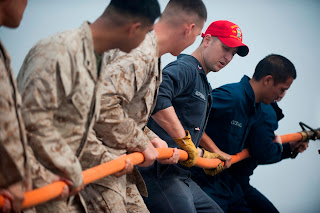 Sailors and Marines aboard USS New Orleans (LPD 18) stand by to repel boarders, wait for command of "Stand by for a ram!"

Harassment, my ass. All the Iranians did was flip us the bird. Big deal. They'da never got close enough to blow up and do any damage. Cole taught us about that.

Ya wanta see harassment? Here's the original New Orleans after the Japanese "harassed" her off Guadalcanal in 1942: 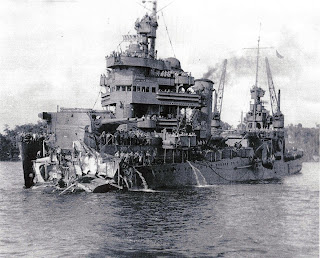 The Iranians are just wavin' their weenies at the neocons. The neocons'll talk big but they won't wave their weenies back. Nothing to wave.
Posted by Gordon at 13:39
Email ThisBlogThis!Share to TwitterShare to FacebookShare to Pinterest

It's always the little dicks who scream loudest for war.

Yeah, they and their kids wouldn't go themselves of course, too important for that, but they don't mind sending other people's kids to die for their imperialist wet dreams.

Man I love that lake.

Imagine if the Navy had some drone boats. Something in the four or five foot range. Big enough to make a wake and be seen but difficult to shoot from a wave bounced boat. Now speed those drones toward the Iranian boats and let them consider the impact of about 20lbs of C4 against their hulls. A couple of guys on the bridge with radio controls could harass those patrol boats as long as there was fuel available.

But that would be an act of war! Better to just have a buncha our ships go by at flank speed, make a coupla turns, and rescue the Iranians when their boats get confused and capsize. Better PR.

One thing to remember is that a) these Iranian speedboats were in Iranian territorial waters, and b) the U.S. refuses to sign the treaty which gives transit rights through Iranian territorial waters in the Strait of Hormuz (the U.N. Convention on the Law of the Sea) because that treaty requires warships to keep their guns aimed away from land (on either side) and transit on the surface (i.e., submarines must surface to go thru the straits).

In other words, the U.S. has no transit rights in the Iranian portion of the Straits of Hormuz, and goes through there merely because being a 120,000 ton aircraft carrier or even just an 18,000 ton cruiser gives you the right to go wherever you feel like going. The Iranians giving us a bit of harassment for our illegal violation of their territorial waters is merely them expressing their frustration at the situation, not some incitement to war -- if they wanted war, they have thousands of Silkworm missiles on shore that could do that job quite well, thank you very much.

- Badtux the "Law is for the little people" Penguin

Perhaps we better assume that BT knows his shit and calm down. Plus, upon reflection, I do not want to give the disgruntled the idea of purchasing RC and/or programmable boats from China and loading them up with the aforementioned 20lb of C4 and pointing them towards our ships. If you us enough internationally sourced components in all of that, you have plausible deniability of national responsibility. (assuming you remember to wipe fingerprints and dna and such)

Of course, while it would cause some hardship here if the Iranians were to close the straits, part of that hardship would be that without the oil that comes through there, the price/value of available oil, including that sourced in North America, would likely increase significantly. I would imagine that there are several operations in the U.S. and Canada that would love to see such a boom. At the same time, it would decrease the ability of Iran to convert its natural resources into monetary wealth and thereby weaken its bargaining position throughout the world.

Yea, look for the neocons to be all about seeing if they can bring about that situation.