How in Hell does this happen in this day and age?

Three people have died and at least 50 more are missing after a cruise ship carrying thousands of passengers, including 24 British holidaymakers, ran aground off Italy's coast.

One of the victims was a man aged in his 70s who reportedly died of a heart attack caused by the shock of the icy water when he dove in during the chaos.

A major rescue operation was launched last night after the Costa Concordia began sinking near the island of Giglio, off the Tuscan coast.

Five helicopters plucked people to safety after they became trapped on the ship when it listed so badly they could not launch lifeboats. 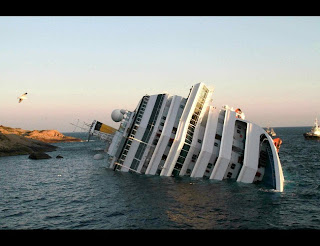 Posted by Fixer at 09:51
Email ThisBlogThis!Share to TwitterShare to FacebookShare to Pinterest

That is just fucked up stupid.

How in the hell do you run aground a multi million dollar cruise liner with all the navigation devices available in these days?

Foe Petes sake, GPS alone will tell you within three feet exactly where you are.

I've been on the bridge of cruise ships, Nucks. This just blows my mind. I've seen frieghters tear their bellies open on reefs, but that was due to their captains trying to make time and taking a short cut. The captain of a Signature-class cruise ship has no excuse. It happened at night so it's the deck officer's fault, but the captain is gonna swing along with all the senior officers. They'll all be looking for work tomorrow if they're not sitting in an Italian jail already.

Somebody done fucked up.

That was incredible! Possibly the most navigated sea in the world, all the modern bells and whistles and it still runs aground?

I hope the 70 missing folks are not all dead!

Now it's just a hundred thousand tons of junk.

Were there any other boats around when it happened? Maybe they were playing chicken.

Uhm, nobody plays chicken with a 100,000 ton cruise liner. No one. I sometimes watch the big ships pass under the Golden Gate Bridge. There's a protocol you're supposed to follow, when two power-driven vessels are meeting head-on both must alter course to starboard so that they pass on the port side of the other. But those big Chinese container ships don't change their course, 'cause they don't have to. Some idiot in a 30 foot pleasure boat wants to play chicken? Fine. Said idiot shall be paste shortly thereafter.

Needless to say, most folks have sufficient common sense that this isn't a problem :).

From what I see this morning, she's in shallow water; she won't sink or roll over. My buddy Dave the Engineer says they'll probably refloat her and take her to dry dock. She was built in the Fincatieri Yards in Italy so she'll be rebuilt.

They showed on a map on Euronews where she is exactly. It looks like she missed the ship channel by 5 miles. The Mrs. and I have been through there many times in and out of Civittaveccia and it's pretty hard to miss the ship channel. Hell, even without navigation, all you have to do is follow someone else, a freighter or another cruise ship.

As I thought yesterday, the Captain has been arrested and is in custody.