More dumb shit Jarheads, or, "One Shot, One Foot!" 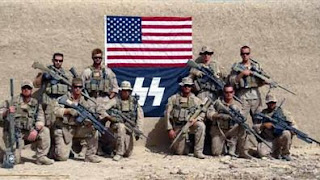 When I first saw this, my mind instantly went "uh-oh" followed by two scenarios, neither of them good.

Neo-Nazis, white supremacists, etc. have gotten past their NCOs and officers. Not likely in the Corps, but it has happened in the Army.

These are young, dumb, cockstrong scout-snipers who haven't a fucking clue.

The commander of a group of U.S. Marines who were photographed in Afghanistan with what looks like a Nazi SS flag concluded they were acting out of ignorance rather than bigotry and decided not to punish them, a Marine Corps spokesman said on Thursday.
...

Master Gunnery Sergeant Mark Oliva, a Marine spokesman at Camp Pendleton in California, said the commander of the elite sniper team involved had investigated the matter and decided no disciplinary action was warranted.

“They didn’t realize that they were associating themselves with something that was racist, fascist,” Oliva said. “This was a chance to educate our young Marines about” the history of the Nazis and “the power of symbols.”
...

“They saw ‘SS’ and associated it with ‘scout sniper’ rather than the Nazis,” Oliva said.

I will give them the benefit of the doubt on this one. Of course, I'm a little biased but I'm glad it went this way and I accept it.

It's hard to come up with a logo/flag etc. for anything with the initials "SS". Maybe they should change 'scout sniper' to something like 'Scouts and Marksmen'.

"S & M" oughtn't to be too hard...
Posted by Gordon at 15:03
Email ThisBlogThis!Share to TwitterShare to FacebookShare to Pinterest

Gordon read the comments on this story over at the Marine Times.

Not isolated or all that ignorant of what it was.

One of the things that grinds my goods over this bullshit is the preemption of historical symbols by the worst of humanity.

A friend from work informed me this week that Tibet was full of Nazis. The reason for this epiphany? He saw a documentary on Tibetan Buddhism and saw the 'swastika' emblazoned on the prayer wheels. I told him it was originally a Sanskrit symbol for eternity. He gave me that blank "but Hitler made it up" look. Totally clueless.

I also note that the 's' in the Nazi SS is the rune Sowelu, which means "wholesome, Life force and the Sun"

That little butt munch Austrian troll took those otherwise benign symbols and perverted them forever by emblazoning them all over his vile depravity.

We can't immediately jump crosswise over those who use these symbols. It's important that we know how they're used and the purpose behind them.

I'll give these chuckleheads the benefit of the doubt as well. Although I'm sure some of them knew full well what these symbols meant but stayed quiet to get along.

Interesting though, that these young fools got through school without knowing what the 'SS' was all about. When the conservatives take over, certain subjects in history seem to be left out of the curriculum. Another case of the whitewashing of the lessons learned from WWII.

Had I been an NCO and seen that, I would have had those guys strip to the waist and God help any of 'em who had Nazi or white power tattoos. I will bet at least one or a couple of 'em knew exactly what that was a symbol of, but they got away with it.

I followed montag's link. One of the comments:

"I have shirts from 91 - 93 that have the SS on them, some with it covered up after the command found out -- this goes waaaay back and is nothing new for Marine Kopfjagers."

So this has been going on for 20 years or more and the scouts/snipers know the command doesn't like it (or prohibits it, according to the PowerPoint link in the article).

I had to Google "kopfjager" and up came a military apparel store selling a Marine Corps shirt with the SS logo and a death's head.

We're to believe that none of these young men have played 'Call of Duty', "Medal of Honor', 'Battlefield 1942'? I'll grant it's likely that none of 'em are aware of Wolfenstein 3D, since that was literally before their time.

All highly detailed violent videogames with WWII settings and frequent depictions of the SS logo in association with Nazis. All hugely popular among men of that age and inclination.

It strains credulity to the breaking point. "Dumb jarhead" is a convenient media and social trope, but really isn't true, particularly for an elite unit like this.

And I read the comments a MCT - power/violence fetishism at its most sickening.

They know exactly where it comes from.

I call bullshit on "none of them knew what it was". The white power crowd and their Christian Dominionist butt-buddies have *long* been using the armed forces as a training ground for their personal Armageddon plans. Who do you think was getting so bothered about gays in the military - can't have the Aryan Nation's spoiled brats exposed to that, they might act out the hate they've been raised with and lose free access to guns and training...

Of course they knew what they were doing. This is no coincidence. I wouldn't allow one of them to shave their head like the Nazis either. What a dispicable "look" that has become. The "bad guys" don't run around w/shaved heads in 120 degree temperatures do they? How do you like your "less than 1 percent" professional military?