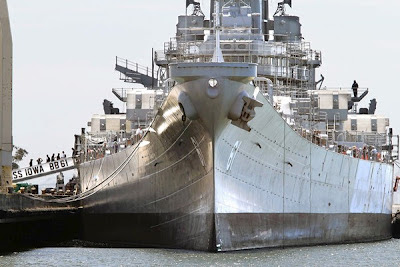 Visitors, at left, board the battleship Iowa at the Port of Richmond recently. The vessel is being prepared for its journey to Los Angeles, where it will be a floating museum. (Don Bartletti, Los Angeles Times / May 11, 2012)

The Iowa's ultimate destination is San Pedro, where on July 7 it will open to the public for tours and remain as a central attraction on the community's waterfront.

"In the last century, this was battleship country," said Robert Kent, director of the Pacific Battleship Center, the group that campaigned to win the Iowa for Los Angeles. "All of our battleships called it home in the period from 1920 to 1940, when Franklin D. Roosevelt sent them to Pearl Harbor to put pressure on the Japanese."

Actually, the Pacific Fleet was (and is) stationed from Bremerton WA to San Diego, including a former major presence at Long Beach, slightly south of "Pipas" as San Pedro is known to Angelenos. The gag here is that Long Beach real estate ads were so plentiful in Iowa and caused so many Iowans to move there that it was known as "Iowa By The Sea".

Note to the museum's curator and management: I know you will want to make a big splash with your new toy, but for God's sake point those popguns seaward
before you do this! 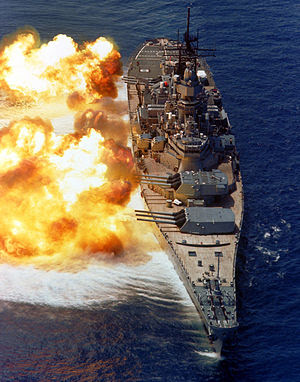 Even if you follow naval tradition and don't hit a damn thing, you could burn Southern California down to its fuckin' socks! Heh.

Ship museums are a good thing. Fair winds and following seas to all concerned with this.
Posted by Gordon at 14:24
Email ThisBlogThis!Share to TwitterShare to FacebookShare to Pinterest

Notice which direction the ship is moving when the guns go off. Takes a lot to push a ship like that!

In defense of naval guns, with a 16in round, you don't have to get real close.

I went aboard the USS Missouri when she was moored at Bremerton. Battleship duty were the epitome of billets for sailors. Fuck the carriers!

One of my buddies fm Radioman 'A' School served aboard the Iowa when Turret 2 blew up. The Navy's reason, a gay sailor committing suicide, was bullshit from the start. It was a faulty primer charge.

Leave it to politicians and bureaucrats to make a tragedy worse by blaming the people first and not the crap manufactured by the lowest bidder.

The Navy always blames the enlisted men first. The powder that blew had been improperly stored (outside, I think) for thirty years,

Well, there's also the fact that the powder, the primer, *and* the shells all were manufactured during WW2, so we're talking, what, 1984? That's 40 years after it was manufactured!

The last barrels for the 16" guns were scrapped about ten years ago. The barrels currently on the ship aren't usable. So I seriously doubt there's going to be any 16" salutes when the Iowa gets towed into port.

Note that we no longer have the means to manufacture 16" gun barrels, nor the ammunition for them. Not that it really matters. Any target that would require naval bombardment would be defended by sufficient sea-skimming missiles that the battleship would be sunk well before it was within gun range of the target (i.e. the battleship would only be usable as a cruise missile carrier in that case and we have a lot cheaper ways to haul cruise missiles around) and any other target is just as easily hit by GPS-guided bombs dropped from a flying bomb truck. Battleships are, alas, yet another of those cool things rendered obsolete by the advance of technology.

We did the Intrepid in NYC last year. Very cool, got to go on that sub they have there too.

USS Growler. Love the Intrepid. Gotta get back there when they get the shuttle Enterprise installed.

And compare one of these pics of Iowa to the WW2 pics of her and you'll pick out her updates; chopper deck, guided missile bridge, etc. All things unheard of when her keel was laid.

I don't know what you are talking about. We hit everything we aimed at all those times we got called to bail out some of Uncle Sam's Misguided Children. Of course, I never got close to a battleship. CGs, DDGs, Birdfarms, and Grunt boats were about they would temporarily stash a CT on.

My old school pal Steve is a retired Senior Chief. His first boat was Growler. Just the other day he got me to vote for her as my favorite place to put some funding over new grout at Grant's Tomb and things like that.

CT? I had to bail out some CTR's that were stationed on my first ship (USS Reeves CG-24)

Their equipment went tits while underway and they lost satcom. Since I was the most qualified (ie: slowest one to find something else to do) I had to go into the black box to help with repairs. All I saw was two frustrated 3rd class PO's with patch cords and a bunch of LPO's sitting on a big black tarp covered workbench. (mustn't let the lowly RM3 see the secret stuff!)

In case you were wondering, the CO authorized entry as long as all classified material was secured even though I had TS ENTNAC clearance. If you ain't got a reason to see it, you ain't gonna see it.

When we finally got a ping fm FSC4, I was ushered out faster than a fat guy at an all-you-can-eat buffet.

I almost changed fm RM to CTI but didn't want to strike for 6 more years. Got 127 on the DLAB (Defense Language Aptitude Battery) In addition to English, I speak fluent Gibberish.