Stolen from my own Facebook page after first stealing it from The Christian Left. 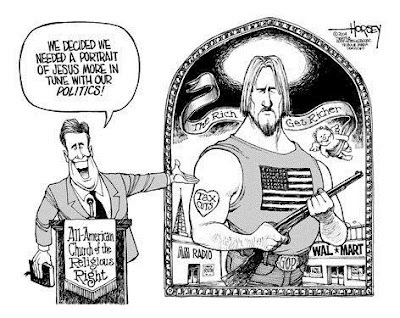 Should you encounter this incarnation of Jesus remember that if you use a "six o'clock hold" aim at the bottom of the flag. For "point of aim = point of impact", hold on the 6th or 7th stripe. In real life of course, such a figment of a deluded imagination will not look exactly like that and your round will get him right at the top of his beer gut or, more likely, dead center in his fat ass when he realizes liberals have guns too and turns and runs away.

Also, in the unlikely event of close quarters combat (righties run very fast when afraid), common courtesy requires you to remove the magazine and clear the chamber before you jam the weapon up his ass.
Posted by Gordon at 14:21
Email ThisBlogThis!Share to TwitterShare to FacebookShare to Pinterest