EssEffChron, many links and a HUGE photo gallery. 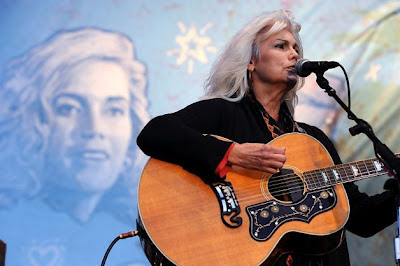 As Emmylou Harris walked out on stage Sunday to close the 12th annual Hardly Strictly Bluegrass Festival in Golden Gate Park, as she has every year, a light ocean breeze picked up, signaling the end of a great musical weekend.
...

Buddy Miller, who serves as the festival's unofficial chief musical collaborator, brought out a crowd during his Banjo Stage performance on Saturday that included Harris, Victoria Williams, Jim Lauderdale, and newlyweds Patti Griffin and Robert Plant, who blew a Led Zeppelin-style harmonica solo into the mix. Phil Alvin and his brother Dave staged a mini-reunion of their landmark '80s Los Angeles rockabilly outfit, the Blasters, on Saturday at the Star Stage.

Now, I ain't much interested in the comings and goings of celebrities but ROBERT PLANT AND PATTI GRIFFIN ARE MARRIED?!!! Holy shit. That's huge. Best wishes, kids.

The producers of Hardly Strictly, who also operate Slim's and the Great American Music Hall nightclubs, have refined the festival to a science over the years. The weekend's major problem occurred before the crowd showed up Saturday morning when a pizza oven in the concession area caught fire. A San Francisco Fire Department hook and ladder unit was on the scene in less than three minutes. Stage manager Sheri Sternberg kept a tight schedule that forced hard choices on concert-goers at peak hours - Dwight Yoakum at the Tower Stage or Nick Lowe at the Rooster Stage? Patti Griffin at Rooster or Cowboy Junkies at Star? Producer Dawn Holiday has become expert in booking a broad range of acts that somehow manage to coalesce into a musical identity that is uniquely HSB.

This is the great gift of Warren Hellman, the one and only, to not only the City of San Francisco, but the world of music. Long after the Hardly Strictly is no more - and there are no plans for that in the foreseeable future - his deeds and the music will be remembered.

Lots better to read about than crazy fucking Repugs and the fucking election campaign.
Posted by Gordon at 14:18
Email ThisBlogThis!Share to TwitterShare to FacebookShare to Pinterest

Lοok at my site; small loans