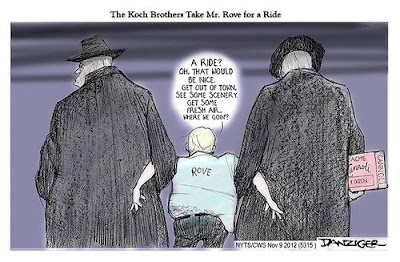 "It's not the frog march I was hoping for, but it'll do."

The "inside baseball" war is getting underway. Excellent! From Politico:

Richard Viguerie, a pioneering direct-mail consultant, called for Republicans to purge from their ranks Rove and Ed Gillespie — who helped found Crossroads and later moved over to Mitt Romney’s presidential campaign — as well as Romney advisers Stuart Stevens and Neil Newhouse. “In any logical universe,” he argued, “no one would give a dime to their ineffective super PACs, such as American Crossroads.”

I love the smell of sour grapes in the morning!
Posted by Gordon at 13:12
Email ThisBlogThis!Share to TwitterShare to FacebookShare to Pinterest

I expect there is someone working for Koch Security who is just waiting after a decent interval for the right time to clean up.

Sooner rather than later. :-)