Just one more reason I hate right-wingers. It's a long list... 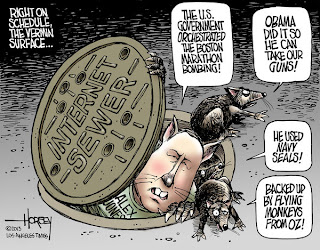 Nearly as soon as I heard about the bombings on Monday, I was certain that somewhere in the nutty right-wing blogosphere someone was already concocting a storyline that would blame the crime on President Obama and the federal government. Alex Jones came through with impressive rapidity.
...

Jones is asking Americans to believe that their own government is responsible for all of the worst terrorist attacks in the country’s history and that the motivation for the latest one is a desire to grope sports fans. All of this is, of course, total ping-pong-balls-for-brains nonsense. It would be laughable if it were not for the fact that this conspiracy kook claims 2 million radio listeners and more online followers than Glenn Beck and Rush Limbaugh combined.

Jones is a purveyor of the neo-Confederate brand of “patriotism” that has gained currency on the far starboard side of American politics. I do not think he should shut up or be shut down; he has the same 1st Amendment rights as I do. But he deserves to be exposed for what he is: a delusional, self-promoting bully who is slandering the very people who are right now doing the truly patriotic work of bringing the Boston bombers to justice.

Some people will say anything for money and fame, never mind the damage they do. I hope he chokes on it.
Posted by Gordon at 13:08
Email ThisBlogThis!Share to TwitterShare to FacebookShare to Pinterest

Jones is so far any reservation that he is equally despised by the right and the left. It is a special person that can claim that. Listening to him is wasted time you will never get back. No one on the right claims him, no one on the left claims him.

He is and should be universally mocked and snubbed.

Gгeаt blog hеre! Also your websitе loаds
up fаst! What web host are you using? Can Ι get уour affiliatе lіnk to
yоur host? I wish my ѕіtе loadeԁ up as
quicklу as yours lol