Cruz Does Not Understand Green Eggs and Ham

Among the more bizarre moments of Senator Cruz's fake filibuster tonight was his reading of the Dr. Seuss book Green Eggs and Ham from the floor of the U.S. Senate....

This is an odd choice of a book for Senator Cruz to read in that its message actually supports the position of the Democrats that the Affordable Care Act (otherwise known as Obamacare) should be allowed to go into effect as scheduled.

Some of the lists of circumstances are there if you feel the need.

Then the narrator, after much urging by Sam-I-Am, eats the green eggs and ham to prove Sam-I-Am wrong. However, much to the narrator's surprise, he actually likes Green Eggs and Ham.
...

The narrator then goes on to actually thank Sam-I-Am for encouraging him to try the Green Eggs and Ham.


I do so like
green eggs and ham!
Thank you!
Thank you,
Sam-I-am 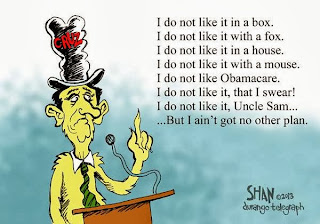 Posted by Gordon at 12:04
Email ThisBlogThis!Share to TwitterShare to FacebookShare to Pinterest