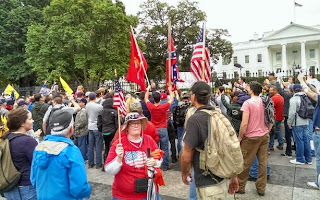 Someone actually thought it was a good idea to bring a Confederate flag to protests at the White House, ones attended by Sarah Palin and Ted Cruz. Shockingly the flag's presence is backfiring for conservatives who hoped today's protests would be the big momentum turn in their favor.
...

Never mind the horrible polling numbers that show Republicans taking a huge hit for the shutdown. At their big turnaround effort to win public opinion, the Confederate flag reared its ugly head and undid any progress or good will they hoped to earn on Sunday. Many were quick to explain just how terribly, impossibly bad this looks for Republicans:

Good for the media. They've finally found the grand mastermind of all conservative politics: some random jackass with a Confederate flag.

Typically representative, I would say.

The secesh, aka "the losers", slave flag is reviled by MOST of this country. If brains were dynamite, the teatards couldn't blow their nose.

The asshole in the center is disgracing MY Marine Corps flag. It needs to be properly disposed of by burning. With him wrapped in it if it was up to me. The goddam slave flag needs to be properly pissed on. Who the fuck do these clowns think they are, anyway? Good Americans? My ass.
Posted by Gordon at 14:07
Email ThisBlogThis!Share to TwitterShare to FacebookShare to Pinterest

And didn't Cruz and Palin have expressions on their faces like they were ready to 'speak in tongues' at the Revival meeting? I tell you, this shit turns my stomach...and everyone acts like this is something all right?

It's like a buncha whiny 5-year-olds throwing a tantrum because they didn't get what they want.

Anyone know where they sell confederate flag toilet paper? I would love to wipe my ass with that flag.

Gordon, that's a dig at 5 year olds, who are more mature than these teabaggers! :-)

We all know that the only reason this all-white crowd were waving a Confederate flag in front of the black guy's house was because they couldn't burn a cross there.

But hey, the EPA is shut down right now...what a golden opportunity for the morons!

Being a former Marine myself, I too was pissed off to see that tool carrying our colors around with that piece of shit rebel flag in his other hand.

When I saw the Confederate flag and the Marine Corps flag held by the same guy, I had to laugh. According to what I’ve been able to find on the internet, the flag-waver is a 24 year old from Texas who claims he spent four years in Afghanistan. I imagine we are to assume he was in the Marines. However, I think (not at all positive) that deployments are approximately one year and there are approximately one year intervals between deployments (a killer for the soldier and his family), wouldn’t that guy have had to have been about 16 years old when he enlisted? Four one year deployments plus four one year intervals between deployments does make eight years, right?

But then, I was equally suspicious of the actual service of a bunch of those old white-haired, fat f….s whining about the WWII memorial. Looked like a put up job to me AND one guy (looked to be in his mid to late 50's) camo’s were brand new and woodland jungle. What? He trained in Panama?

(I'm basing my time/deployment assumptions on my nephew's deployments as well as the young sons of three close friends. I may be way off and I will take a correction from any of you.)