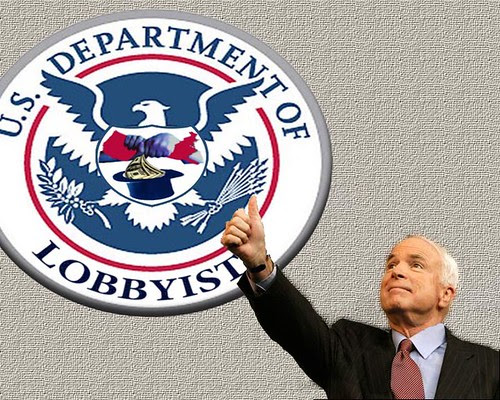 Republican presidential candidate Senator John McCain introduced a sweeping ethics reform proposal today that included the creation of a new Department of Lobbyists in a speech before the Chamber of Commerce in Velva, North Dakota.

The text of his speech follows:

Everyday, corporations or wealthy individuals will make contributions to our campaigns and our shell foundations and PACs , or even give high paying jobs to our wives or children, fully expecting tax or regulatory relief, government contracts, or even subsidies in return.

Too often though, elected officials fail to keep their end of the bargain. They make half-hearted attempts to service their donors, then abandon even that effort if some newspaper or website starts to ask questions. Worse, some don't even make the effort in the first place, pretending that the donation was given out of some idealistic agreement with a candidates ideology, not a fee for service.

My friends, there is a word for not doing what you are paid to do, and that word is FRAUD.

Those in Congress must be held accountable and must be forced to do their patriotic duty for those who supported them financially.

Therefore, I will create a new Department of Lobbyists that will exist solely to expedite service to political donors. They will keep a central database of donations and inform donors of the level of service their donation entitles them to, from a letter to a regulator telling them to back off, to five senators showing up at the regulators office to give him an attitude adjustment.

This will also make life easier for lobbyists. Currently, to seek favors, they have to visit each and every politician they will need on their side, wine and dine them, or provide escorts of their preferred gender. With the new Department of Lobbyists, they will only have to make ONE stop. The DOL will then give the marching orders to the relevant congressmen and senators.

My friends, if I am elected, the Department of Lobbyists will be just the beginning of my ethics reform. If I have to, I will go to the gates of Hell to serve my donors, whether they are trying to outsource jobs, loot their employees pensions, pollute the air and water with coal or nuclear plants, or secure oil reserves in some God-forsaken Middle Eastern backwater.

That is the way America is supposed to work, and under a McCain presidency, that is how it WILL work, so help me God.

Read the rest. I'd say it was funny. but it's a little too close to the truth.
Posted by Gordon at 13:22
Email ThisBlogThis!Share to TwitterShare to FacebookShare to Pinterest