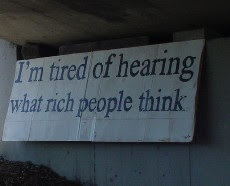 Pic stolen from our pal Nunya.

And a perfect companion piece to the pic:

Barack Obama may have no realistic plan for eliminating the deficit, but neither do Republicans. "Tax cuts" to "create jobs" aren't going to do it. George W. Bush cut taxes for the wealthy time and time again, and unemployment exploded under his tax policies. So can we please stop this "rich people create jobs" nonsense? They had eight years of paying ever less taxes and instead of creating jobs, they created bonuses for themselves. As for spending cuts, let's see Republicans come up with a realistic plan to eliminate the deficit. Elminiate Social Security and Medicare? Go ahead. Propose it. See how far you get, especially among families where one or both breadwinners are unemployed, the savings account they set up for the kids' college has been decimated by the economic crash and their parents have lost most of their retirement savings at the same time. Tell these families that their elderly parents now have to pay all their medical expenses on their own. Then if the other breadwinner loses his or her job, and they start sliding down into poverty, tell them there's no more SCHIP. No more food stamps. No more job retraining. Nothing for them, because "deficit reduction is the only important thing." See how that will fly. [my em]

The Mrs. is working from the city office today so I gotta kick her out at the train station before I go to work. See yas later.
Posted by Fixer at 05:13
Email ThisBlogThis!Share to TwitterShare to FacebookShare to Pinterest