This pic gives more perspective on how close to shore they were. The cruise line is also throwing the Captain under the bus at this point. As I've said in comments on my previous posts, I've been through this area many times and it is impossible not to spot the ship channel, even at night. Civitaveccia (2 hours from Rome) is one of the biggest commercial ports in Europe and the traffic in and out goes on 24/7. Leaving the port, it looks like you're entering a highway, always a line of cruise ships, freighters, and tankers out in the shipping lane. If I were on a cruise ship and saw them approaching this close to land, I would have been running for my life jacket long before they had a chance to hit anything. 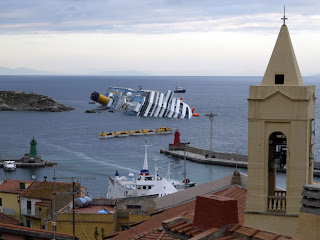 And a note, this is not the port of Civitaveccia, this is the port on the island of Giglio, not deep enough to accommodate this class of cruise ship. Assuming, according to some reports, there was an electrical casualty before they ran aground, heading for this port for repairs was out of the question for the same reasons the course he set was. Fortunately for the people on Giglio, he didn't run it aground in the harbor. 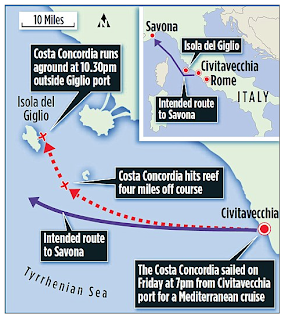 Posted by Fixer at 08:45
Email ThisBlogThis!Share to TwitterShare to FacebookShare to Pinterest

Looks like the Captain is being prosecuted under an Italian law that says the captain must stay with the ship until it's evacuated.

Regarding getting close to land, apparently the ship was deliberately run aground once it started listing after tearing the side open on the reef, so you would have already been wearing your life jacket by the time it ran aground at this point. The captain apparently made the executive judgement that the ship was damaged badly enough that it was going to sink, and if it was going to sink, he was going to make sure it was close enough to land that there was a greater chance that most people would survive. You'd think that cruise ships would be designed better these days so that they wouldn't sink if a gash got torn along their sides, but apparently the Titanic is still the design template for cruise liner safety...

Interesting comment about the life boats not being able to be launched. That was right out of the Titanic too. Lifeboats like these would violate a million OSHA regulations if they were on oil rigs used in the Gulf of Mexico, what's required there are life *pods*, which are completely sealed and enclosed and can slide down the hull into the water even if the oil rig is listing 45 degrees.

No, I don't intend to take a cruise anytime soon, not that I would, I'm the rare penguin that prefers dryer places ;).