No, not the White House Press Secretary this time! 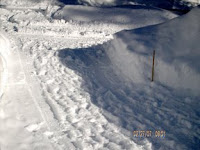 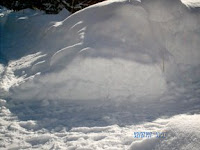 
I have shoveled these goddam berms out of my driveway for 26 years now, but this is the first time I've ever done three of these things in one day. As you can see, I only got rid of enough to get the car out. The yardstick, stuck down several inches into the snow, is for scale.

The berms are deposited legally in my driveway by the town. The law is cleverly written so they can "store" snow there. If you want to get out of your driveway, it's all yours. There are snow plow accessories available that prevent this, but they cost money and slow down the plowing operation. I don't blame the plow weenies (thanks, Fixer!). There aren't that many of them, and they have a lot of miles to cover. Most of them have been awake and on the job for three days now. All the snow in the pictures is since Sunday.

The berm is compacted snow deposited off the side of the blade of a snow plow or grader at pretty high speed. A homeowner-grade snowthrower won't touch it. You have to break it up with a shovel into pieces the snowthrower will throw. That hole in the berm, done 3 times, represents over 5 hours of hard work. Add in the fact that I also blew out my driveway three times, it's more like 8 hours. Me no like hard work!

Especially in a cold, windy snowstorm. I started the first clearing job at 7:30 Monday morning and completed the third at 1:30 Tuesday morning. If I had gotten up this A.M. to find a fourth one, I would have called up Fixer and had him send me a "DuPont Snowthrower".

I kept the clothes dryer going all day. When I got too wet and cold, I took a break, changed clothes, reloaded dryer, had coffee and a smoke until I thawed out, and back at it. I told Mrs. G that if I didn't show up for an inordinate length of time, to go look for the (hopefully!) tallest pile of ice and snow and hit it with an ax handle.

In the midst of all this, about 11:30 Sunday night, I had just cleared my driveway for the second time that day, and noticed a coupla SUVs in the middle of the street with their four-ways flashing. They had been there for some time. They were trying to get up the worst driveway in the neighborhood to spend a ski week at their absentee-owner friend's $700K second-home "cabin". Nobody had called the plow service that they were coming. They were trying to shovel access up, and I do mean 'up', a 150-foot driveway with a foot and a half of packed snow. Their 4-wheel-drives wouldn't make it more than 50 feet and then high-center. They'd spend their whole vacation doing that, so I felt sorry for them, and in my best neighborly fashion, I volunteered to try to do it with my little sneezer 8-really-old-and-tired horsepower snowthrower. Up four feet, back three feet, up four feet, back three feet. Finally got to the top, a real "Little Engine That Could" deal. It was a little easier going downhill, and I finally got them access. The guy was so dazzled he gave me $100, which I graciously accepted after much protest. Protest, yeah, right. I got to bed about 2AM. The plow came Monday morning, but they're bermed-in snowbound with another foot and a half today. Welcome to Truckee, folks.

I think you can tell what I've been up to for the last coupla days. Every bone, every muscle, in my 61-year-old body is howling at me. Thank God for Ibuprofen!

I gave up complaining about these berms years ago, but this was kind of a "perfect storm" of them. I just wanted to share. Oh, yeah, the Sun came out and it's a beautiful day. That makes it worth all the hassle.

Berm No. 4 arrived while I was taking a nap this afternoon. I noticed it at about a quarter to five. Since a big part of my reason for being is to provide Mrs. G with an accessible driveway, I turned to. Luckily for me it wasn't as big as the other ones. I was still standing there with my shovel (a trick I learned from highway workers) when she pulled in. Whew! Just in time, but it's embarrassing for me to have her actually catch me working!

I also got reminded of things I know during my snow clearing adventures:

1. Check the snowthrower gas tank before you get eighty feet from the garage in a snowstorm in the dark, and

2. Due to residual snow in the augur/discharge mechanism, don't squeeze the augur drive lever in the garage! Yeesh.
Posted by Gordon at 12:11
Email ThisBlogThis!Share to TwitterShare to FacebookShare to Pinterest