I'm turning into a relic:

Once a staple in the workplace and the quintessential Father's Day gift, the necktie has seen its popularity wane as many men have opted to ditch the decorative collar accessory in favor of a more laid-back look.

The sentiment is vastly different from the attitude of the 1950s where neckties were common workplace attire, and even Ward Cleaver wore a necktie at home as the father that always knows best on the television show "Leave It To Beaver."

I am a big fan of the necktie and dressing for dinner. It's the way I was brought up, dad was a businessman and my parents used to have dinner parties here (in the 60s and 70s) for his clients and contacts. Looking back at it, it was very Ricky and Lucy (though without the schtick), drinks and cigarettes (everybody smoked back then) before dinner, gathering around the table, and then more drinks and cigarettes after dessert.

The men aways wore jackets and ties and the ladies wore dresses. I, as a little kid, was also dressed, usually in a bowtie and jacket. I guess it stuck. You won't catch me out in a restaurant without a jacket and tie on. My tie collection grows bigger yearly (I have a thing for wild ties and whenever I see one I get it) and must number around a hundred. Another part of it is, I think, that I wear shitty clothes to work (I'm a mechanic, for those who don't know) every day and it's a refreshing change to dress humanly on the weekends.

It's a shame to hear people are not wearing them anymore but that won't change anything (except maybe make a good tie more expensive). I got my own style and I don't change for trends. 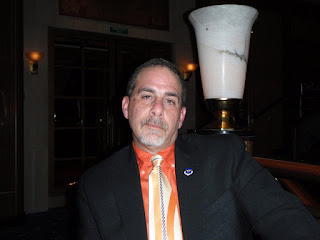 Great thanks to El Comandante for the link.

Posted by Fixer at 05:34
Email ThisBlogThis!Share to TwitterShare to FacebookShare to Pinterest