"Slay the Beast once and for all!"

Today's 'must read' at The Regressive Antidote will make you feel good!

Republicans are going down.

Let me say that again (‘cause it feels so good): Republicans are going down. Hard.

A tsunami this way cometh, and it’s got GOP loaded in its GPS.

Anyhow, November 4th is going to be a serious party in a whole lot of households across the entire planet, but November 5th is in many ways going to be even more amusing. For, along with getting clobbered in the race for the White House, the Republicans are going to get smashed all across the ballot, from the US Senate all the way down to local dogcatcher races. They are going to be shell-shocked zombies. The walking wounded. Poster-children for PTSD. And, they are neither going to know what to do about it, nor will they have any particularly attractive options from which to choose.

Many of the looniest of the regressive right will insist that their problem was that they simply weren’t conservative enough! The rest of us here in the reality-based world should cross every finger, toe and any other bodily appendage we can, in the hopes that these folks win the fratricidal war inside the party. Yeah, man, that’s what America wants! Not less of the thirteenth century, but more! More war! More bankruptcy! More lies! More recession! More deficits! More economic predation! More environmental destruction! More trashing of the national reputation! More Constitution shredding! More democracy debasing! More corruption! More sexism, racism, xenophobia and homophobia! More polarization and rancor in our politics! More imperial presidency accountable to no one! More drowned cities! More incompetence! More Bushes! (Yo, Jeb – what up, dude?) Of course! What could Republicans ever have been thinking? The problem with conservatives is that they didn’t realize until too late that America is actually more conservative than Bush, Scalia, DeLay and the rest.

[...] This party is today nothing whatsoever other than a vehicle for corporate predation. It pretends to give a shit about abortion or affirmative action to get votes. It pretends to be pious to sucker preacher-programmed Jesus Freaks into voting for it. It pretends to care about national security because a good fright always comes in handy on election day (and also because there’s loads of fat, no-bid contracts to be had from the corpulent military-industrial complex). In fact, though, it doesn’t care about any of those things.

Indeed, in truth it is a misnomer to even consider the GOP to be American in any real sense of the normal meaning of that term. Ironically, the party of xenophobia and so-called national security has long been little more than a wholly-owned subsidiary of corporations whose locations and tentacles are completely global, and whose only real interest is in importing wealth to shareholders and management, while exporting risk elsewhere. [...]

[...] Indeed, this is probably what the McCain candidacy now represents, though pre-November 4th he must still genuflect deeply in the direction of the rapacious right – whether of the corporate, imperialist or religious stripe.

My guess is that you can’t bury these guys forever, and that, anyhow, the new Republican Party that emerges after their near-death experience in 2008 will be much more moderate than the crazed one of the Reagan-through-W era (and how could it not be?).

All of that would be a major improvement on the horror story we’ve all lived through these last decades, though of course, even better would be to slay the beast once and for all.

Meanwhile, whatever happens, progressives are about to live through the Woodstock of schadenfreude.

Enjoy the ride. Boy, have we ever earned it.

As far as I'm concerned, the money line in that piece is "slay the beast once and for all".

Note to Repugs: Payback is a sucking chest wound and you made the ammo that we will be very pleased to shoot you and pin an Ace of Spades to your forehead with. 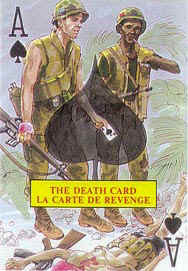 I'm trying to not be smug just yet because it could all go horribly wrong, but a little anticipatory practice smugness, just to see what it feels like for later, feels good and can't hurt.
Posted by Gordon at 13:07
Email ThisBlogThis!Share to TwitterShare to FacebookShare to Pinterest