We had a swell time out on the coast. The main reason we went was to go out to lunch with Mrs. G's High School class. The Arroyo Grande High School Class of '63 has a very active reunion schedule due mostly to the organizing efforts of a gal named Edith. I'm not going to say she's pushy or loud or forceful, but rather she has a lot of personality and energy and gets what she wants. Mechanics will understand when I say that she can return electrical parts to an auto parts store with no questions asked because the parts guys know what will happen if they don't!

A lot of these folks have known each other since about 1949 and spent their growing-up years together. Edie has been the ramrod of class spirit and has organized the reunions since '68. She has a committee of folks helping her, partly because they like to do it, and partly because she's hard to say no to. Anyway, she realizes that these folks ain't gettin' any younger and she's going to organize twice-yearly get-togethers in addition to the regular 5 year 3-day extravaganzas.

Here's Hurricane Edie doing what she does. Those hands are loud!: 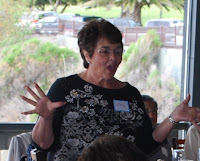 In case you can't tell, I like this gal a lot. Edie is of Mexican descent, and her husband is of Filipino-Japanese descent and was born in an internment camp during WWII. An awful lot of good American citizens from Arroyo Grande were relocated to those. Anyway, the mix of whites (a lot of Portagees like Mrs. G, lotta Dust Bowl Okies too), Mexicans, Filipinos, and Japanese was so common in that little seaside agricultural town in those days that Mrs. G's classmates don't even notice it.

Just as an aside, even though AG has grown by a factor of 15 since these folks were kids and now boasts(?) a population of 16,000 and is considerably more upscale than it was, you can still buy fresh strawberries at a stand next to the field they were grown in in the middle of a residential neighborhood within sight of the ocean. Sadly, it's not as common as it was, even in my own memory since the '70s.

This is the Pelican Point Bar & Restaurant where the get-together was held:

Nice joint in a picturesque location. Our party had a buffet, but I looked at the regular menu. The left-hand column made my mouth water, but the right-hand column told me to enjoy it while yer here, peasant, 'cause this establishment is out of your league and you won't be back unless yer numbers hit!

Also, I'm not sure I'd wanta be enjoying fine dining in that place at the same time the North Pacific plate decided to relieve itself. The rapidly changing panoramic view would be a rush, though!

The next picture is from the walkway around the restaurant and is of the spot I took the last picture from. You can see the Pismo Beach pier and on around the Sand Dunes to the right to Point Sal at the other end of San Luis Bay, probably ten miles or so, beyond which lies Vandenberg AFB. 'Sal' is Spanish for 'get out!' as in 'run for your life!'.

Is it any wonder I love the Central Coast? It's all Mrs. G's fault.

The rest of our trip was spent visiting with Mrs. G's family. Her family is a three-generation matriarchy, with her sister as the current matriarch. The rest of us are known, because I named us that, as 'the husbands' and are amicably tolerated. That includes Mrs. G's nephew's wife as well. Heh. Speaking as the oldest, I'm not only the oldest, but currently in the best shape amongst the males. Both of Mrs. G's nieces' husbands have recently proved the old adage that 'there's never been a hoss that couldn't be rode, and there's never been a cowboy that couldn't be throw'd'. Gordie got pitched off his buckskin and has some busted ribs. Sean tossed his 950 KTM away at speed on a dirt road and broke his ankle, exposed his kneecap to the sunshine, and has about an acre of gravel rash. Both are recuperating and have plenty of time to ponder the error of their ways.

Since there's always a little gallows humor in anything that doesn't actually involve funerals, here goes: the guys in the same truck that Sean laid his sled down to avoid gave him and the bike a ride home, from whence his wife took him to the ER, where, in extreme agony, he positively carpet-bombed the joint with f-bombs according to reports. Sean is 6'6" and weighs 300 pounds. The only rig in the whole family they could get him home from there with his knee and ankle immobile was my SIL's pickup. In the bed. With the tailgate open. Heh.

And Sean, if I didn't have some slight experience with young (Fixer's age) men with fast motorcycles, I mighta believed your hopefully-wife-placating claim of 'Honest, honey, I was only doing 35 miles an hour'. Yeah, right. She and my SIL don't believe it either. I think he'll be more careful about making sure he's not going too fast to see to stop next time.

Gordie's wife decided he needed a night out to relax, since he'd been running his store with broken ribs. Where d'ya take a guy with broken ribs to relax? Why, a stand-up comedy show of course! Literally side-splitting humor! Heh.

The rest of the trip was pretty uneventful. California is known as 'The Golden State' because it is usually GBD, which, unlike tasty-lookin' food, does not mean 'Golden Brown & Delicious' but 'Godawful Brown & Drier'n a popcorn fart'. Not this time. We've had considerable badly-needed precipitation out here in the last month or so, and the whole drive down and back was gorgeous. Lush, gorgeous, wet green! It only happens for a few weeks every year and I'm not always there to see it. It's just beautiful to an old native Californian like me who's a lot more used to seeing tinderbox dry brown hills. Also, the sun was shining and the air was clear enough to see the Sierra Nevada from the 5. That doesn't happen every day either.

On our way home we took a slightly different route than we usually do that skirted the eastern edge of the Bayarreah Bay Area to see if anything had changed since the last time I lost my mind and did that. It hasn't changed much except for more development and traffic. Oh, and the businesses out there have staggered schedules so there's no one crippling traffic jam at rush hour. It's rush hour all the time!. I had forgotten about that. We cut across and joined up with I-5 at Tracy. We're used to the traffic from that point up through Stockton and Sacramento.

So as soon as our sanity returned from all the metropolitan madness, we stopped for gas at a gas station with a crashed UFO on the roof. Only in California!

The next picture is on I-80 east out of Sacramento, the last leg of our trip. Must be someone who gets Brain posts before they're posted. Sure looks like one of Fixer's fixer-uppers on its way to its final resting place ultimate destination. Right in front of me, naturally. This was about 4:30 PM so it really was rush hour. Yeesh. Thanks, F-Man. When I finally passed this rolling carnival, it had the word 'scrap' spray-painted on the side. Looked OK to me, as it must have done to its proud new owner. Note the big bug on the windshield. At one point, I had so many crashed bugs on there I had to keep my head moving to see where I was going. Spring has done sprung in the valley.

Got home to a foot of fresh snow in my driveway. Spring ain't quite sprung here yet.

I'm just trying to get over truck lag, so I hope you'll forgive me for taking the easy way out today. The politics'll probably still be there tomorrow.
Posted by Gordon at 13:04
Email ThisBlogThis!Share to TwitterShare to FacebookShare to Pinterest