Off we go, into the wild blue yonder... 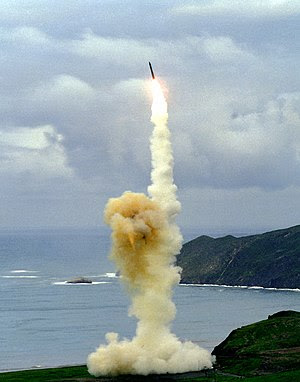 From the Silicon Valley MercuryNews, which used to be called the San Jose MercuryNews. Sigh.

VANDENBERG AIR FORCE BASE, Calif.—The Air Force successfully launched an unarmed Minuteman 3 intercontinental ballistic missile Monday from the California coast to an area in the Pacific Ocean some 4,200 miles away.

I think the operative word that makes what used to be a common event newsworthy is 'successfully'.

My in-house missile launch expert is Mrs. G, who grew up fifteen miles north of Vandenberg. She says the Minuteman launches were boring because they were too fast. It took a little while for the shock wave to get to her house and by the time the windows rattled signifying a launch and she'd rush to the window to watch, they were gone.

The Titans were a lot slower and she had time to watch the rocket exhaust going up with a flame at the top.

The best ones of all could be seen from Los Angeles to Frisco and perhaps even farther away. Those were the night launches that went awry. The contrail, lit up brilliantly in shades of green by high altitude sunlight, would make patterns in the sky ranging from a series of 'Z's to a macramé-looking bunch of loop-the-loops.

The best part of all was when the operators blew it up. For just an instant, you coulda read a book by the light all along the West Coast, and then the glowing and contrails of all the pieces would blossom out and up and down like the 4th of July. All this light would hang up there for quite a while, broadening out until it dispersed. Wow, like, totally bitchin' light show, dude! The entertainment was a great use of taxpayers' money.

I wonder if I posted this as some kind of subconscious reaction to this morning's aftermath of the events of yesterday? Maybe something having to do with a stream of fire shootin' out my...
Posted by Gordon at 12:05
Email ThisBlogThis!Share to TwitterShare to FacebookShare to Pinterest