Ya think the wingnuts will bitch that she's "not a real American"? Do you think, were she walking down the street somewhere in Arizona, she would be asked for her "papers"? 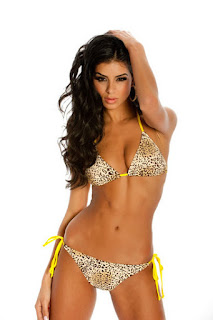 Fakih, an Arab-American from Dearborn, Mich., told pageant organizers her family celebrates both Muslim and Christian faiths. She moved to the United States as a baby and was raised in New York, where she attended a Catholic school. Her family moved to Michigan in 2003.

Pageant officials said historical pageant records were not detailed enough to show whether Fakih was the first Arab American, Muslim or immigrant to win the Miss USA title. The pageant started in 1952 as a local bathing suit competition in Long Beach, Calif.

Well, I was wrong ...
Posted by Fixer at 05:20
Email ThisBlogThis!Share to TwitterShare to FacebookShare to Pinterest