Flatlanders Flip for Foot of Fluff!

Weather's always fun. More fun than whatever the Repug Outrage of the Day is. I'm so used to this shit I find it amazing that people even give it a second thought. When the TV folks in Sackatomatoes say "we're" gonna get a lotta snow, my reply is always, "Yeah dipstick, and we're gonna shovel it, right?"

There's a very slight distinction between Donner Summit and Donner Pass. Donner Summit is where I-80 switches from climbing to descending and has a highway rest stop that's been closed for rebuilding for two years now, and also a geographical area maybe three miles by a mile where there are small communities, ski areas, maybe still a post office. You can't see one from the other. Donner Pass is the two-lane pass over the Sierra on old Highway 40 that enters and exits the geographical area. Highway 40 is maybe a mile as the crow flies and two ridgelines from I-80 and is more or less a scenic bypass. The weather is exactly the same. Unless you're trying to be precise there's not much difference. Boreal is right off the Interstate and easy to get to. 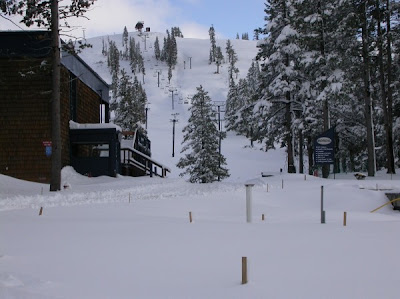 This is October 6? Shot taken at 4 p.m. Thursday at Boreal near Donner Summit. Photo by Tom Stienstra

Those familiar with the Sierra know this is probably a short-term anomaly. All this snow could even melt off next week when the temperature is expected to climb into the high 60s and perhaps low 70s. But if cold nights keep it around, not just at Donner Pass, but the entire Sierra Crest and Shasta, it portends great things for the winter, mountain resorts and state’s water supply. This snow was very heavy, the wet Sierra cement. If it freezes, it would make a great base level, and allow future powder to pile up on top of that base without melting off. That would allow ski areas to open early across the mountain country.

It’s been a crazy year. I talked to a truck driver from New York and he said he drove through Tahoe-Donner in June and ran into a blizzard. Now here it is only four months later and he runs into another one? Shortest summer imaginable, eh? Well, maybe. Maybe not. Many years, we haven’t had significant coverage of ski runs until December.

One side story: The problems on I-80 were immediate. On Wednesday, the California Highway Patrol closed I-80 eastbound in the morning because cars were wiping out all over the place. After reopening it in the afternoon, several accidents required that they close it again. On Thursday, Caltrans posted chain controls on their website and road hotline, (800) 427-7623, but city drivers in 2-wheel-drives were still pushing it at 70 mph, and no one had to chain up. I clicked my rig into 4-wheel-drive and tried to enjoy the scenery and avoid the speeders.

Still can’t believe this is the first week of October.

Tomorrow I'm going about 15 miles over the summit to ride my last trial of the year at the PITS property. That's near Cisco Grove (a "populated place") at 5600 feet of elevation. The club honchos think yesterday's snow will be gone. It's all northern exposure and I don't think it will be. We'll see how that works out.
Posted by Gordon at 14:29
Email ThisBlogThis!Share to TwitterShare to FacebookShare to Pinterest

Tomorrow I'm going about 15 miles over the summit to ride my last trial of the year ...

There's always one in the truck.

I once went to a Hare Scrambles. The day before in practice it was dry and normal. That night it snowed six inches. The hills there dropped a thousand feet over a quarter mile ! Talk about pucker factor ! Needless to say, most did not finish that race. Still remember one sleigh ride down the mountain, with the front and back wheels both locked up. Must have been doing 90 when I finally made it to the bottom ! Yeee Haw...
Damn that were fun.

I did a lot of desert racing years ago, HS, H&H, Enduros. Lotsa funny stories. The funniest ones are about almost crashing. Heh.

I'd post my photo of a Jeep owned by a club member stuck in a snowbank almost as tall as it is, but Blogger doesn't allow posting photos in comments. Probably for the best, given the clientele around here :).

Spud, a couple of stories like that (in 1st person) are why I finally gave up motorcycling and went to the more sedate hobby of Jeeping. Extracting the seat from between my cheeks was startin' to take too much time and too many people :).

I think my favorite was always the Great Bear GP at the old Riverside Raceway. Nothing like doing 120 then jumping into a mudhole from pavement.
Those were the days...

I watched the STP turbine cars take each other out at Riverside back in the day.