Ann Richards was a good ol' gal. I can't think of a better person to play her than Holland Taylor, the amoral randy Mom in Two And A Half Men. 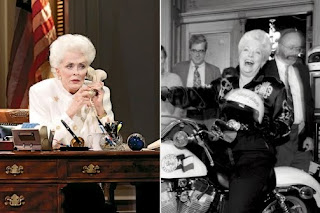 Taylor(l) and Ann on her hawg.

The play is set in Richards’s statehouse office, lined in mahogany, with a commanding desk and a towering chandelier. Done up in an elaborate wig that recalls the former governor’s trademark white pouf and projecting a presence much larger than her diminutive frame, Taylor spends much of the two hours of running time on the phone with aides, lawyers, speechwriters, and her character’s children. Sliding effortlessly into Richards’s archetypal drawl with its strategically lazy cadences and surprising swells (Taylor’s chum Tom Hanks, whose voracious boss she played on his breakthrough 1980s sitcom, Bosom Buddies, made sure she used his dialect coach), she captures the governor’s sly humor, talent for intimacy, and knack for getting her way. Much of the script centers on Richards’s personal life: her alcoholism (she stopped drinking in 1980), her traumatic divorce from her husband of 30 years, Dave Richards, and her complex relationship with her offspring.

Although the play shows her grappling with issues including the death penalty, concealed-handgun laws, and abortion, it is far more character study than polemic. George Bush is mentioned only obliquely, and there is nary a mention of Karl Rove, the master political puppeteer who engineered Richards’s undoing (after the election he attributed Richards’s defeat partly to a speech she made to a Girl Scouts conference in Austin warning young women to beware of “Prince Charming on a motorcycle with a beer gut and a wandering eye”).

Hey! I resemble that remark!

“My pal Stockard Channing calls this my ‘moonshot.’ The one chance to go for broke. I’ve always been a hired gun, and not always so fulfilled by my work. Now I’ve had the chance to be a leader, to do something that’s beyond just myself, something meaningful. Who would have imagined?”

I wish you all success, Ms. Taylor.
Posted by Gordon at 16:45
Email ThisBlogThis!Share to TwitterShare to FacebookShare to Pinterest

I'd always hoped that Ann Richards would become our first female president. Alas, it was not to be.

Ain't nobody called me "Prince Charming" when my ass was on a motorcycle all the time. Heh ...