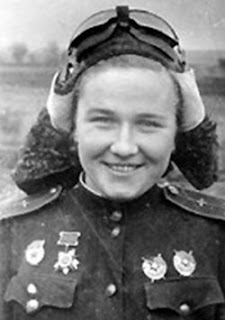 I had heard of the "Night Witches" but this account of one's life and passing is fascinating. "AF weenie" NOT!

Nadezhda Popova, who has died aged 91, was a member of an elite corps of Soviet women — known as the “Night Witches” — who fought as bomber pilots in the air war against Germany, and the only one to win three Orders of the Patriotic War for bravery....

In late 1941 Stalin signed an order to establish three all-women Air Force units to be grouped into separate fighter, dive bomber and night bomber regiments. Over the next four years these regiments flew a combined total of more than 30,000 combat sorties and dropped 23,000 tons of bombs. Nadezhda Popova, then aged 19, was one of the first to join the best-known of the three units, the 588th Night Bomber Regiment (later renamed the 46th Taman Guards Night Bomber Aviation Regiment).

The 588th was not well equipped. Wearing hand-me-down uniforms from male pilots, the women flew 1920s-vintage Polikarpov PO-2 two-seater biplanes, which consisted of fabric strung over a plywood frame, and lacked all but the most rudimentary instruments.

There was no radio; navigation was done with a stopwatch and a map. The planes carried no guns, no parachutes and had only enough weight allowance to take two bombs, forcing the pilots to make multiple sorties (Nadezhda Popova once flew 18 in a single night), returning to base each time to collect more bombs, which were released with a wire cable jury-rigged to the wings.
...

It was the cold that she recalled more than anything else: “When the wind was strong it would toss the plane. In winter when you’d look out to see your target better, you got frostbite, our feet froze in our boots, but we carried on flying.” There was no time for fear: “You had to focus on the target and think how you could hit it. There was no time to give way to emotions... Those who gave in were gunned down and they were burned alive in their craft as they had no parachutes.”
...

She decided to volunteer as a bomber pilot after her home was taken over by the invading Germans and her brother, Leonid, was killed at the front: “He was 20 and had never even kissed a girl,” she recalled. “My mother sobbed, 'That damn Hitler.’ I saw the German aircraft flying along our roads filled with people who were leaving their homes, firing at them with their machine guns... they blasted our school.”

After the war she returned to her work as a flying instructor.

She is survived by her son, now a general in the Belarussian Air Force.

From her Wikipedia page:

The regiment was called "Nachthexen" (Night Witches) by the Germans "because the whooshing noise their plywood and canvas airplanes made reminded the Germans of the sound of a witch’s broomstick."

Right before she flew it up their, er, heinies. Heh.

Fly on Nadezhda. The choice of flying machines is yours.
Posted by Gordon at 13:38
Email ThisBlogThis!Share to TwitterShare to FacebookShare to Pinterest

And if there are angels....may they all be her wingmen.

Wow! Not just a pretty face! It'd be funny to see the ultimate chickenshit armchair warrior GW Bush try to take off in one of those airplanes, lol.

Yeah, "angel" is the right word.

They called it the Great Patriotic War in the Soviet Union all the way up to the fall of the Berlin Wall because of people like Nadezhda Popova. The Soviet Union defeated Nazi Germany, the U.S. came in at the end and cleaned up, but the Soviets inflicted 3/4ths of the casualties inflicted upon the Germans...

Nadezhda stayed in my mind as we finished up our latest batch of mead...this one black as night. We bottled it today, and had to give it a name...the first glass when we pop those corks goes to her and the rest of the Nachthexen.