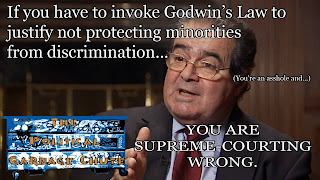 A tip o' the Brain to The Political Garbage Chute.

Word of Scalia’s claims comes by way of The Aspen Times, which reports that Scalia’s speech was titled, “Mullahs of the West: Judges as Moral Arbiters.”
...

The Aspen Times added that Scalia opened his speech with a clear analogy to Germany in the years before the Nazi Party — during a time Scalia believed Germany to be “the most advanced country in the world” much like the U.S. today. Judges then, he contended, were very open to new interpretations of the law, also like the U.S. today.

Time for the rocking chair, Tony, before you fuck up much else around here.
Posted by Gordon at 15:14
Email ThisBlogThis!Share to TwitterShare to FacebookShare to Pinterest