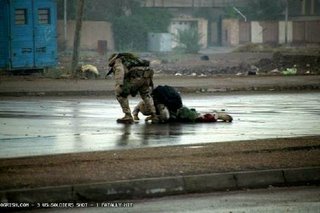 Ashbah
The ghosts of American soldiers
wander the streets of Balad by night,
unsure of their way home, exhausted,
the desert wind blowing trash
down the narrow alleys as a voice
sounds from the minaret, a soulfull call
reminding them how alone they are,
how lost. And the Iraqi dead,
they watch in silence from rooftops
as date palms line the shore in silhouette,
leaning toward when the dawn wind blows.
Brian Turner


1 May 2003 Chimpy McFlightsuit declared the Iraq invasion launched 20 March 2003 to be a Mission Accomplished in the long war on terror: "The battle of Iraq is one victory in a war on terror that began on September 11, 2001, and still goes on", he said. But it wasn't supposed to be going on in Iraq any more. Major combat operations there were supposed to be over and the victory belonged to him. Maybe Fearless Leader was already planning to move east from Baghdad to Tehran in his endless war on terror. Osama bin Laden, who planned and organised the 9/11 attacks, remains free to this day and vows that he won't be captured alive. With Dear Leader leading the offensive I guess bin Laden doesn't have to worry about that happening because this preznit is more focused on his pre-emptive invasion terruh doctrine; despite the utter disaster in Iraq he has reaffirmed his authority to launch a pre-emptive war against countries he deems a threat.

As of today 2318 soldiers have been killed. More than 30,000 Iraqis have been killed. Almost 17,000 troops have been wounded. How many purple hearts have been awarded? (And how many repubs will slap a purple heart bandage on their bods to belittle the Fighting Dems?) Horrible abuses have been perpetrated by Coalition forces and Iraqi fighters. War is a brutal business and without strong leadership the ugliest of the ugly rise to the top. Leadership in Iraq? Despite the preznit and his band of pirates' denials, Iraq is "in the middle of a civil war", says Alawi. Murtha stated the case to his colleagues in the House:

Situation on the Ground
CLAIM: Over the past several months, Administration officials have argued that the situation in was improving. Recently, General Peter Pace, Chairman of the Joint Chiefs of Staff, noted on "Meet the Press" [Sunday, March 5, 2006] that the situation in Iraq was going "very, very well."
FACT: Since the last week in February 2006, sectarian violence and death has reached new heights. In the past few weeks alone, over a thousand Iraqi civilians have been killed in the violence.
FACT: Electricity production remains below pre-war levels. received an average of 6.4 hours of electricity per day. Oil production was at 1.77 million barrels per day, some 30% below pre-war production rates. [ Weekly Status Report of March 1, 2006 from the State Department]
FACT: The number of incidents per week have tripled since one year ago [summary of classified information provided by the Central Intelligence Agency]
FACT: Unemployment ranges from 30-60% nation-wide. In -- the epicenter of the insurgency -- unemployment reaches 90%. [summary of estimates by the State Department and intelligence agencies]

And the only leading this preznit is doing is to take us all down the path of destruction. It's too early for us to say Mission Accomplished, but let's get out the vote for the midterm elections this year. Here are some great candidates who need our support (your state, your vote, your voice):
Fighting Dems
Band of Brothers
Fighting Dems on AirAmerica
Act Blue
Progressive Patriots
Blue Force
"If we do our parts, believe it, we'll be the ones left standing. Here endeth the lesson". Buffy

Theme music for the 3rd anniversary of BushCo's Blunder:
Modest Mouse: Bury me with it
Suicidal Tendencies: Institutionalised
Shriekback: All lined up
No Doubt: Trapped in a box
Green Day: American Idiot
Steve Earl: John Walker's Blues
White Stripes: Seven nation army
Kris Kristoferson: Don't let the bastards get you down
Billy Bragg: Which side are you on?
Dead Kennedys: Holiday in Cambodia
big bonus track that sums it all up: Eric Burdon and the Animals: We got to get out of this place [salute to Gordon]

Posted by Nina at 16:22
Email ThisBlogThis!Share to TwitterShare to FacebookShare to Pinterest