[As always, a big Brain welcome to Sideshow readers and great thanks to the wonderful Avedon for the linkage.]

C & L has the goods but I loved this line:

“I’ve been asked, what’s the first thing I’d do as president in the year 2009, and January 20th. And I’m going to give you back your Constitution, because this administration has gone out of it’s way to do just the opposite and the Constitution does not belong to a political party or a candidate and they’ve been trampling all over it.”

By the way, thanks to Bush, there are a lot of pissed off Germans here and people aren't shy about telling me what a buncha assholes we've become.

And let me just add, these are people I've known for more than 40 years. People who thought Jack Kennedy was the greatest thing since sliced bread and whose dream it was to come to America. People who used to ask me to send them anything (t-shirts, stuffed animals, posters) with an American flag on it. As far as they're concerned now, we can shove it all up our collective ass. Being they have experience and all ... 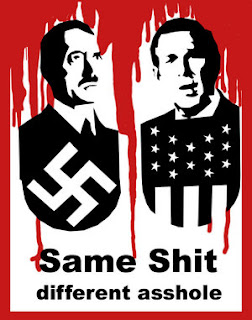 Posted by Fixer at 03:46
Email ThisBlogThis!Share to TwitterShare to FacebookShare to Pinterest