Or, What a difference a half-century makes.

I was out early, having my morning cigarette (have I mentioned it's fucking cold here?), watching the dawn break, when Mrs. F joined me. She commented how beautiful it was in this valley. I said that I always expect to hear Grieg's Morning playing whenever I step outside.

That thought brought me back to a story my mother used to tell me.

It was near the end of WW2, late '44 or early '45, and my mother was home for a bit of leave before going back to the field hospital where she was a nurse. The Americans had an artillery battery set up a few miles away on the other side of this mountain. 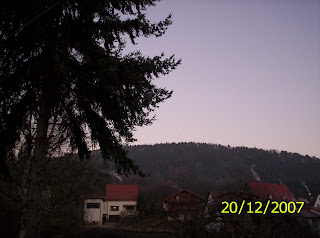 She said they would lob shells into the town on a regular basis, forcing the residents to seek shelter in their basements. A few miles away, on the other side of town, there was a German anti-air battery set up.

One day, an American fighter plane came in low, from this direction. She thought he was either looking for German supply convoys or was going to line up to do a ground assault on the local train station. 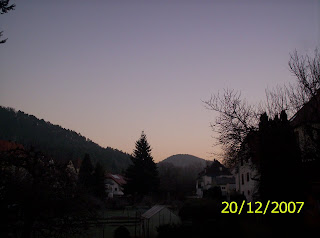 As she watched (from the spot I took these pics), she heard the German AAA open up and they caught him, the plane crashing in a fireball on the mountain in the first pic. Being a nurse, mom didn't think twice, stuffing a bag with supplies and running to the scene. All she found when she got there were the scorched remains of a fighter plane and the pilot's right hand with a wedding ring on the finger.

60 years later, it's almost impossible to believe this place was once a war zone. As I stand here in disbelief, trying to comprehend the inhumanity that took place here, I think of the people in Iraq, also once at peace and, through no doing of their own, are now feeling the effects of the horror we've wrought upon them. This little town, this little slice of heaven on God's Front Porch, knew only horror and death for years thanks to a man named Hitler. The Iraqis know the same horror and death (for it's all the same to the innocent) thanks to a man named Bush.

Hopefully the Iraqis can move on from what we've done to them but I don't think it will happen anytime soon. It is imperative we right the wrongs we've done, just as the Germans did so many years ago. The Iraqis must have their Morning and it's up to us to give it to them.

As always, click on the pics to embiggen. I'm going upstairs to breakfast now, but after thinking about this and my mother's war, I don't think I have an appetite.
Posted by Fixer at 02:25
Email ThisBlogThis!Share to TwitterShare to FacebookShare to Pinterest