Repugs brown their knickers in fear and you should too! 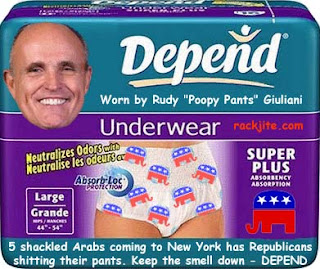 This seems to be one of those issues where we find the Party of Tea being against something only because President Obama is for it.

Rudy Giuliani makes it clear in this Daily Show video that in 2006 he was all for trying terrorists in New York City, gracefully speaking up for our country, our effective legal system and it being the ethical, moral and right thing to do. Three years later a full 180 that trying terrorists within our failed legal system is beyond abhorrent. What happened?

Project Obama Fail is what happened.

It would seem conservatives would want a public, transparent trial at the very spot it happened. To get their bloody hands on them and to personally have a say in their coming executions. It's so very conservative to allow New Yorkers to have at em.

Well of course the Repugs want to execute them! They just want to do it in secret, like they want to kill everybody who sees through their shit but can't due to some quaint ol' goddamn piece of paper 'rule of law' thing, what was it? Oh, yeah - The Constitution. What they're really afraid of is that the whole Bush/Cheney/Yoo/Addington/rendition/CIA "black sites' (like this one in Lithuania) might come out just in time for the 2010 elections.

What we have here is the Republican party playing the only working card they have in the deck. SCARE YOUR PANTS OFF! Whether it be Iraqis, Iranians, Muslims, the Taliaban, Chinamen, death panels, socialism, debt (other than war debt) and perhaps above all those Uppity Negroes in the White House. Fear is all they have any more. AND IT WORKS! Toughen up America!

The Repugs'll shit themselves in publicly suppressed joy if their fearmongering shoves some nutter off the edge and he offs Obama. They just love shittin' themselves if it hurts people and advances their retard agenda.
Posted by Gordon at 18:05
Email ThisBlogThis!Share to TwitterShare to FacebookShare to Pinterest